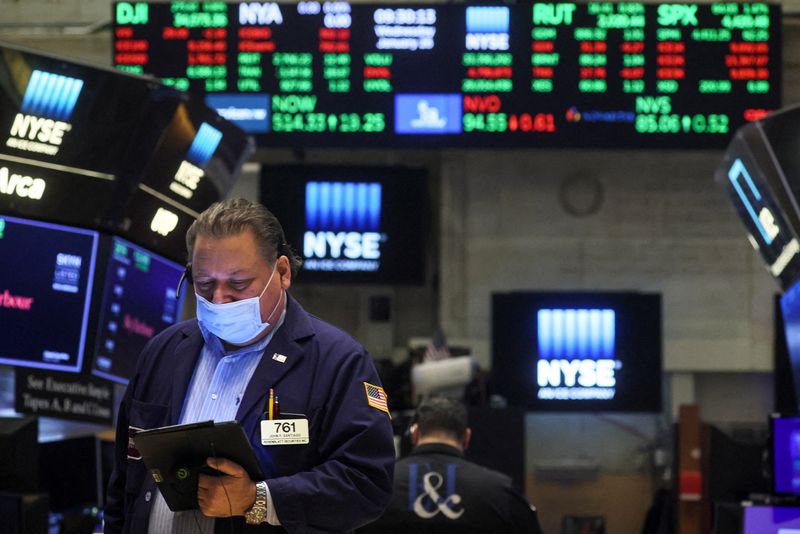 All three major U.S. stock indexes began the day in the red, but turned increasingly green as the session progressed, with tech shares doing the heaviest lifting.

The S&P 500 and the Dow posted gains from last Friday's close, but the Nasdaq was essentially flat on the week, capping five days of topsy-turvy trading.

"Investors are trying to adjust to the impact of this higher rate cycle," said Rick Meckler, partner at Cherry Lane Investments, a family investment office in New Vernon, New Jersey. "For some of them, stocks still remain more attractive than bonds in a rising rate environment, and they have been fishing around for where a bottom might be."

"You're seeing bargain-hunting in a number of stocks, particularly in the Nasdaq," Meckler added.

Economic data released on Friday showed a drop in consumer spending coupled with the lowest consumer sentiment reading in a decade, and year-on-year Core PCE prices - the Federal Reserve's preferred inflation yardstick - came in at 4.9%, slightly hotter than expected.

The graphic below shows how far core PCE and other major indicators have risen above the Fed's average annual 2% target.

The Fed made it clear at the conclusion of its monetary policy meeting on Wednesday that they intend to take off their gloves and combat stubbornly persistent inflation by hiking key interest rates more aggressively than many market participants expected.

Among the 11 major sectors of the S&P 500, all but energy ended green. Tech stocks were the clear winners, gaining 4.3%, the biggest one-day jump for the sector since April 6, 2020.

Fourth-quarter reporting season was firing on all cylinders, with 168 of the companies in the S&P 500 having reported. Of those, 77% have delivered consensus-beating results, according to Refinitiv data.

But investors have been increasingly focused on guidance, and the extent to which companies expect ongoing global supply challenges to affect their bottom line going forward.

"As we move into 2022, and as Omicron peaks and the weather improves, I expect supply-chain pressures to ease," Said Ross Mayfield, investment strategy analyst at Baird in Louisville, Kentucky. "(They) will probably peak sometime this quarter, and ease throughout the year."

However, Apple's 7.0% jump gave the S&P 500 and the Nasdaq their biggest boost, the day after the company posted record iPhone sales in the holiday quarter.

Advancing issues outnumbered declining ones on the NYSE by a 1.83-to-1 ratio; on Nasdaq, a 1.92-to-1 ratio favored advancers.

Volume on U.S. exchanges was 12.80 billion shares, compared with the 12.10 billion average for the full session over the last 20 trading days.