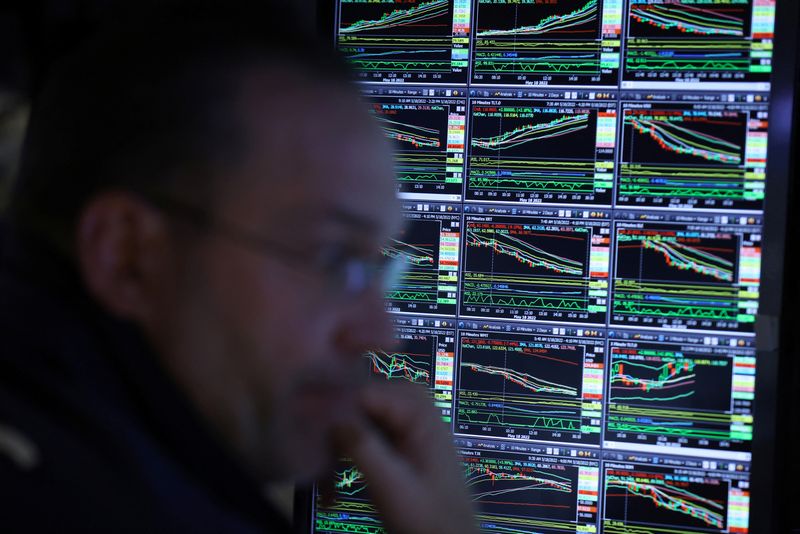 A trader works on the trading floor at the New York Stock Exchange (NYSE) in Manhattan, New York City, U.S., May 18, 2022. REUTERS/Andrew Kelly

By Devik Jain and Noel Randewich

(Reuters) - Wall Street ended lower after a volatile session on Thursday, with Cisco Systems slumping after giving a dismal outlook, while investors fretted about inflation and rising interest rates.

Shares of Cisco slumped 13.7% after the networking gear maker lowered its 2022 revenue growth outlook, taking a hit from its Russia exit and component shortages related to COVID-19 lockdowns in China.

"The reality is that inflation is running hot and interest rates are rising," said Terry Sandven, chief equity strategist at U.S. Bank Wealth Management in Minneapolis, Minnesota. "Until you get that inflation rate to start slowing, we're going to have increased volatility, and in our view that continues through throughout most of the summer months."

Twitter climbed 1.2% after Bloomberg reported that company executives told staff that Elon Musk's $44-billion deal was proceeding as expected and they would not renegotiate the price.

The S&P consumer staples index fell 2% to its lowest level since December as retail firms face the brunt of rising prices hurting the purchasing power of U.S. consumers.

Its shares, however, rebounded over 4% after slumping 11% in the previous session due to dismal results from Target Corp.

The S&P 500 is down about 18% from its record close on Jan. 3 as investors adjust to strong inflation, geopolitical uncertainty stemming from the war in Ukraine and tightening financial conditions with the U.S. Federal Reserve raising rates.

A close of 20% or more below its January record high would confirm the S&P 500 has been in a bear market since hitting that peak, according to a widely used definition.

Goldman Sachs strategists predicted a 35% chance of the U.S. economy entering a recession in the next two years, while the Wells Fargo Investment Institute expects a mild U.S. recession at the end of 2022 and early 2023.

Thursday's mixed performance followed a drop of over 4% in the S&P 500 on Wednesday, the benchmark's worst one-day loss since June 2020.

The CBOE volatility index, also known as Wall Street's fear gauge, fell to 29.5 points on Thursday, after hitting its highest level since May 12 earlier in the session.

Volume on U.S. exchanges was 12.7 billion shares, compared with a 13.4 billion average over the last 20 trading days.

Advancing issues outnumbered declining ones on the NYSE by a 1.15-to-1 ratio; on Nasdaq, a 1.31-to-1 ratio favored advancers.

(Reporting by Devik Jain and Amruta Khandekar in Bengaluru, and by Noel Randewich in Oakland, Calif.; Editing by Arun Koyyur and Grant McCool)