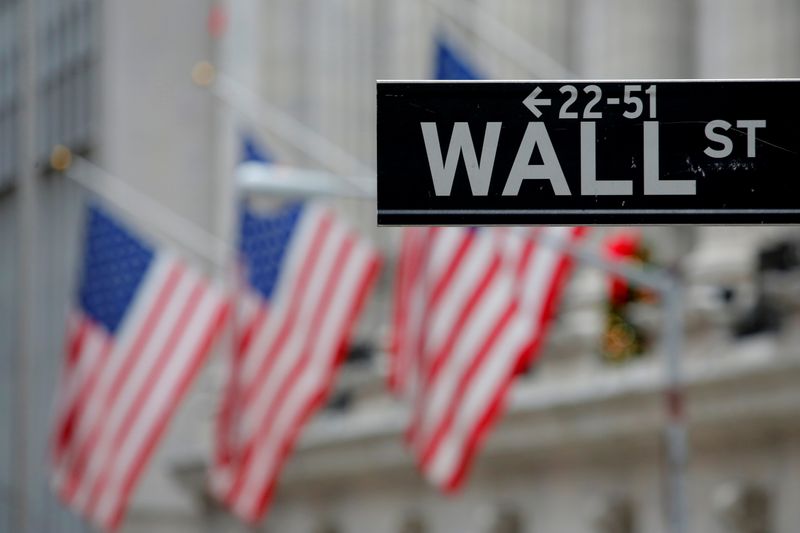 By SinÃ©ad Carew and Kevin Buckland

(Reuters) - Wall Street stocks closed higher on Monday, regaining some of the ground they lost in Friday's sell-off, as investors were hopeful that the Omicron coronavirus variant would not lead to lockdowns after reassurance from U.S. President Joe Biden.

The Nasdaq led gains among the major averages with help from the technology sector, while the S&P and the Dow advanced after suffering their biggest one-day percentage declines in months in Friday's holiday-shortened session as investors worried that the latest COVID-19 variant would cause economic disruption.

Biden said on Monday that Omicron-related lockdowns were off the table for now and he urged Americans not to panic about the variant. However, he did recommend vaccination and mask wearing indoors to combat the virus and said the United States was working with pharmaceutical companies to make contingency plans if new vaccines were needed.

Those comments and indications from drug companies that they are taking the variant seriously were reassuring for investors, who had been anxious about the potential for further COVID restrictions.

"Friday was a major de-risking event. You had the market go back to its worst fears of COVID spreading and the return of lockdowns," said Edward Moya, senior market analyst at OANDA.

Vaccine makers such as Pfizer, its partner BioNTech and their rivals Moderna and Johnson & Johnson said Monday they are working on vaccines that specifically target Omicron in case existing shots are not effective against the variant. nFWN2SK0VH]

"It's not like the start of the pandemic all over again," said Carol Schleif, deputy chief investment officer for the BMO family office in Minneapolis who also noted that after Friday's knee-jerk reaction, investors have been trained this year to buy the dip. "People are willing to just take a deep breath and try to reassess, be a little more patient."

Among the S&P's 11 major sectors, technology was the leading percentage gainer, up 2.6%, followed by the consumer discretionary sector, which closed up 1.6%, with boosts from Amazon.com and Tesla Inc.

Other big boosts from single stocks in the S&P came from Microsoft and Apple Inc, which gained ground after HSBC raised its price target for the iPhone maker.

While the Dow advanced, it underperformed its peers with pressure from Merck & Co Inc, which closed down 5.4%. The drugmaker extended losses from Friday when updated data from a study of its experimental COVID-19 pill showed lower efficacy in reducing risk of hospitalization and deaths than previously reported.

Britain said it would offer a COVID-19 booster vaccine to all adults and give second doses to children aged between 12 and 15, in light of concern about the spread of the Omicron variant. It also said Moderna and Pfizer vaccines were the preferred boosters.

After the U.S. market close, the U.S. Centers for Disease Control and Prevention said everyone aged 18 years and older should get boosters six months after Pfizer or Moderna COVID vaccines or two months after a Johnson & Johnson shot.

The Philadelphia semiconductor index outperformed the broader market with a 4% gain as chipstocks rose broadly. Nvidia provided the biggest boost with a 5.9% gain.

Tesla's shares gained 5% after a report that chief Elon Musk urged employees to reduce the cost of vehicle deliveries.

Twitter Inc closed down 2.7%, reversing early gains after the social media firm said CEO Jack Dorsey will step down and be succeeded by Chief Technology Officer Parag Agrawal. Dorsey had been in the unusual position of having the CEO job at two major technology companies, the second being digital payments firm Square Inc.

Advancing issues outnumbered declining ones on the NYSE by a 1.31-to-1 ratio; on Nasdaq, a 1.35-to-1 ratio favored decliners.

On U.S. exchanges, 11.13 billion shares changed hands on Monday compared with the 10.84 billion average for the last 20 sessions.