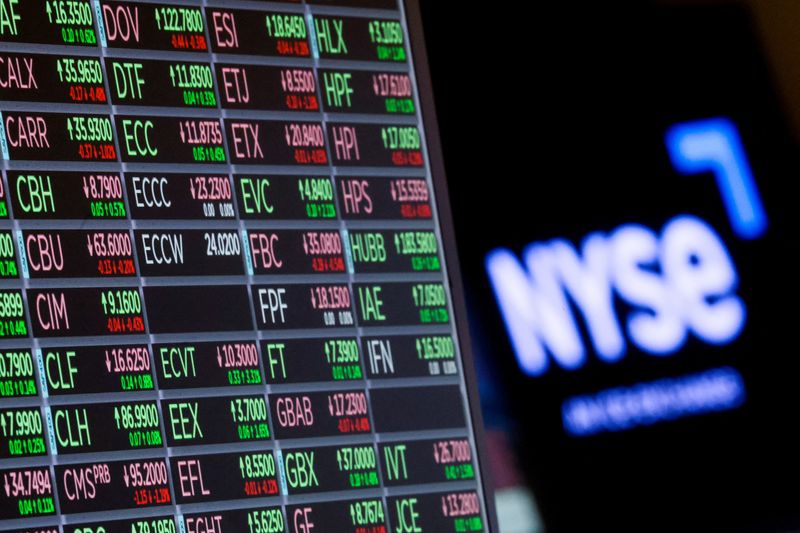 NEW YORK (Reuters) - The S&P 500 ended a seesaw session slightly down on Wednesday as investors staggered toward the finish line of a downbeat month, a dismal quarter, and the worst first-half for Wall Street's benchmark index since President Richard Nixon's first term.

The three major U.S. stock indexes spent much of the session wavering between red and green. The Nasdaq joined the S&P 500, closing nominally lower, while the blue-chip Dow posted a modest gain.

"The market’s struggling to find direction," said Megan Horneman, chief investment officer at Verdence Capital Advisors in Hunt Valley, Maryland. "We had disappointing data, and the markets are waiting for earnings season, when we'll get more clarity" with respect to future earnings and an economic slowdown.

With the end of the month and the second quarter a day away, the S&P 500 has set a course for its biggest first-half percentage drop since 1970.

The Nasdaq was on its way to its worst-ever first-half performance, while the Dow appeared on track for its biggest January-June percentage drop since the financial crisis.

All three indexes were bound to post their second straight quarterly declines. That last time that happened was in 2015.

"We have a central bank that has had to pivot from a decades-old easy money policy to a tightening cycle," Horneman added. "This is new for a lot of investors."

"We’re seeing a repricing for what we expect to be a very different interest rate environment going forward."

Of the 11 major sectors of the S&P 500, five lost ground on the day, with energy stocks suffering the largest percentage drop. Healthcare led the gainers.

Benchmark Treasury yields have risen by over 1.606 percentage points so far in 2022, their biggest first-half jump since 1984. That explains why interest rate sensitive growth stocks have plunged over 26% year-to-date.

Federal Reserve officials in recent days have reiterated their determination to rein in inflation, setting expectations for their second consecutive 75 basis point interest rate hike in July, while expressing confidence that monetary tightening will not tip the economy into recession.

In economic news, U.S. Commerce Department data showed GDP contracted slightly more than previously stated in the first three months of the year. Consumer spending, which accounts for about 70% of the economy, contributed substantially less than originally reported.

Second-quarter reporting season remains several weeks away, and 130 of the companies in the S&P 500 have pre-announced. Of those, 45 have been positive and 77 have been negative, resulting in a negative/positive ratio of 1.7 stronger than the first quarter but weaker than a year ago, according to Refinitiv data.

What will investors be listening for in those earnings calls?

"Margin pressures, that’s the big concern, pricing pressures, scaling back plans for capex because of the slowdown, and if they see any improvement in the supply chain," Horneman said.

Bed Bath & Beyond Inc tumbled 23.6% following the retailer's announcement that it had replaced chief executive officer Mark Tritton, hoping to reverse a slump.

Package deliverer Fedex Corp dropped 2.6% in the wake of its disappointing margin forecast for its ground unit.

Declining issues outnumbered advancing ones on the NYSE by a 1.96-to-1 ratio; on Nasdaq, a 1.79-to-1 ratio favored decliners.

Volume on U.S. exchanges was 11.55 billion shares, compared with the 12.79 billion average over the last 20 trading days.