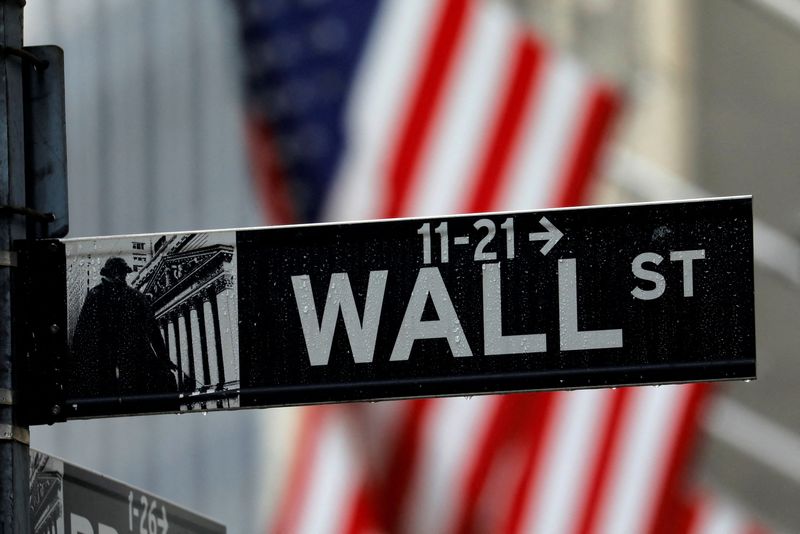 (Reuters) - Wall Street's three major indexes staged a late-session comeback on Monday as the Nasdaq managed to eke out a tiny gain and investors swooped in to hunt for bargains, while the S&P 500 and the Dow Jones Industrial Average finished well above their session lows.

After falling almost 3% earlier in the day and as much as 10.37% below its intraday record level reached on Nov. 22, the technology-heavy Nasdaq pointed sharply higher to regain all its losses for the day in afternoon trading.

While investors spent the morning fretting about rising bond yields and what this week's inflation data might mean for U.S. Federal Reserve monetary policy tightening, others took advantage of earlier nerves to buy the dip.

"We've gotten to the point where you wonder if the roller coaster has peaked and is heading straight down. But fundamentally there's a lot of buyers in this market buying on the dip," said Rick Meckler, a partner of Cherry Lane Investments, a family investment office in New Vernon, New Jersey who attributed much of the afternoon strength to retail investors buying favorite stocks such as Tesla.

Paul Nolte, portfolio manager at Kingsview Investment Management in Chicago also attributed the late session comeback to dip-buyers looking at U.S. Treasury yields fall from their peaks of the day.

"Some of the tech names are off 5 to 10 percent or more, and people are looking at that and going that looks pretty good - time to snap them up," said Nolte.

"The other thing though to keep an eye on is what happens to interest rates because that has really been what's been dragging technology. We saw little bit of a reversal late in the day in (Treasury yields). They came down just a touch and that was a little bit of a green light for tech investors," he said.

After starting the day among the biggest laggards, the S&P technology index managed to eke out a tiny gain of 0.1%, behind the healthcare sector which closed up 1% and ahead of communications services which, rising 0.02%, was the session's only other gainer among the 11 major industry sectors.

The biggest decliners on the day were industrials which closed down 1.2% and materials which dropped 0.99%.

Traders have ramped up their rate hike expectations since the Fed's minutes from the December meeting appeared to signal an earlier-than-expected rate rise.

Goldman Sachs said it expects the Fed to raise rates four times in 2022, compared to its previous forecast of three.

After falling as much as 4.6% earlier in the session, Nasdaq heavyweight Tesla made a dramatic turnaround to close up 3%.

Meckler said retail investors appeared to flood back into the stock which had suffered after Chief Executive Elon Musk tweeted on Friday that the electric carmaker will raise the U.S. price of its advanced driver assistant software.

Nike shares closed down 4.2% after HSBC downgraded the stock to "hold."

Declining issues outnumbered advancing ones on the NYSE by a 2.04-to-1 ratio; on Nasdaq, a 1.97-to-1 ratio favored decliners.

On U.S. exchanges 12.15 billion shares changed hands compared with the 10.55 billion average for the last 20 sessions.