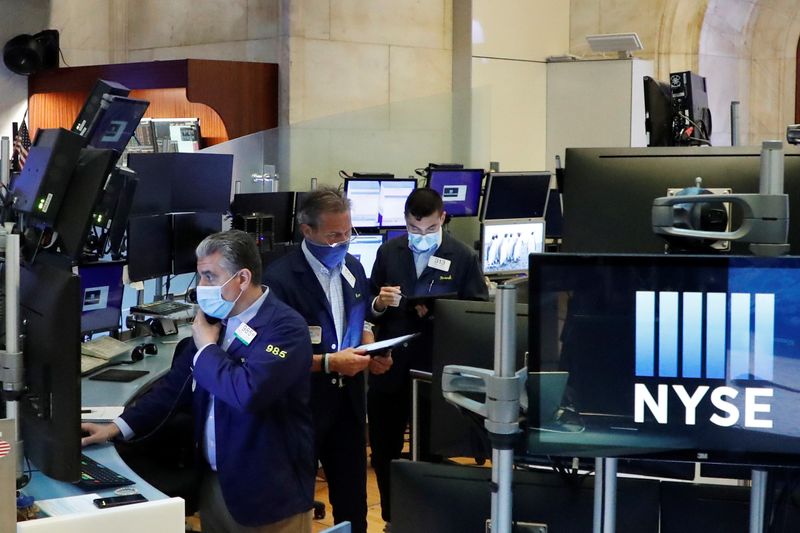 FILE PHOTO: Traders wear masks as they work on the floor of the New York Stock Exchange as the outbreak of the coronavirus disease (COVID-19) continues in the Manhattan borough of New York, U.S., May 27, 2020. REUTERS/Lucas Jackson

NEW YORK (Reuters) - Wall Street closed higher and the Nasdaq reached an all-time closing high on Thursday as investors headed into their long holiday weekend buoyed by a record surge in payrolls, which provided assurance that the U.S. economic recovery was well under way.

Massive stimulus and hopes for a speedy economic rebound have returned the S&P 500 and the Dow to 7.6% and 12.6% below their record highs reached in February.

The indexes registered strong gains for the week.

"There was a lot to like in economic data for the week," said Paul Nolte, portfolio manager at Kingsview Asset Management in Chicago. "And there's still talk that there will be more stimulus from Washington after they get back from the Fourth of July break."

Still, even with May and June's consecutive record payroll gains, the labor market has still recovered only a fraction of the 22 million jobs lost in the March-April plunge.

The recovery of the U.S. economy, now in its sixth month of recession, could stall as new cases of COVID-19 hit record levels and several states hit hardest by the resurgence halted or reversed plans to reopen their economies. [nL1N2E81ES]

On Thursday, Florida reported a record-shattering 10,000 new cases of the disease, worse than any European country reported at the peak of their outbreaks. [nL8N2E94GS]

"With the spikes (in new COVID-19 cases) we've seen the larger states - Texas, California and Florida - those states have taken steps to turn back their re-opening plans," Nolte added. "And that will slow the overall growth and consumer spending in those regions."

In the coming weeks, market participants will train their focus on second-quarter reporting season. In aggregate, analysts now expect S&P earnings to have dropped by 43.1% as companies grappled with plunging demand and disrupted supply chains.

The CBOE Volatility index <.VIX>, a barometer of investor anxiety, logged its largest weekly point drop since the week ending May 8.

Of the 11 major sectors in the S&P 500, all but real estate <.SPLRCR> and communications services <.SPLRCL> closed higher, with materials <.SPLRCM> enjoying the largest percentage gain.

Microsoft Corp (NASDAQ: MSFT) provided the biggest boost to the S&P 500, and in June retained its top spot as the most globally invested stock, according to data from trading platform eToro.

Advancing issues outnumbered declining ones on the NYSE by a 1.90-to-1 ratio; on the Nasdaq, a 1.28-to-1 ratio favored advancers.

Volume on U.S. exchanges was 10.03 billion shares, compared with the 13.24 billion average over the last 20 trading days.

(This story corrects index that has recovered since February to the Dow instead of the Nasdaq, paragraph three)