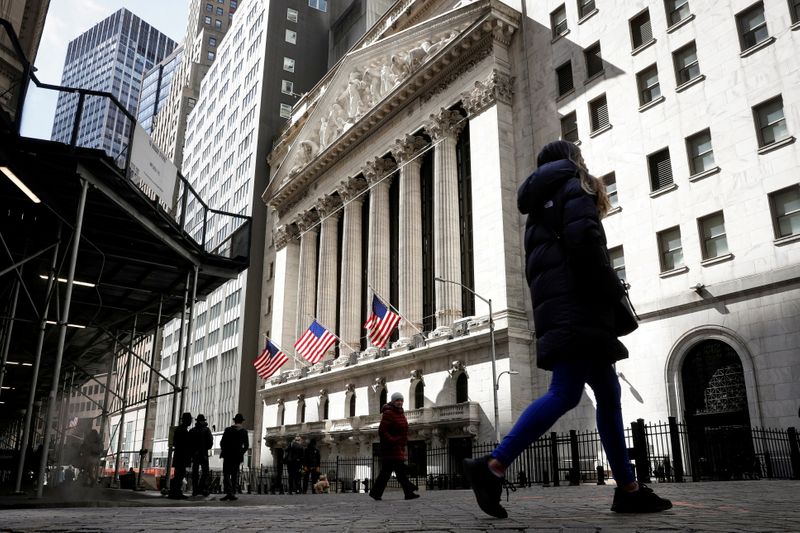 NEW YORK (Reuters) - Wall Street closed higher in a broad rally, an upbeat conclusion to whipsaw week of buying and selling as signs of a rebounding economy squared off against mounting inflation jitters.

"Today 'everything is going up day' because everyone is buying," said Chuck Carlson, senior vice president at Wealthspire Advisors, in New York. "It's a 'buy everything' day."

"This week, given the big swings, is more evident of a trader's environment than a long-term investor's environment," Carlson added. "It's a market looking for its next sustained impulse to the upside."

Those big swings were stoked by economic data, which fanned concerns that near-term price spikes could translate into long-term inflation, despite assurances to the contrary from the U.S. Federal Reserve.

"Inflation continues to be the biggest concern," Carlson added. "And when interest rates didn't go to new highs the bulls take over and investors are willing to step in and buy some of the stocks that had been beaten up this week."

Economic data showed retail sales growth stalling and consumer sentiment dipping as prices remain on an upward trajectory, suggesting that while the demand boom might be taking a breather, inflation has not.

But in an indication that economic activity could return to normal, revised guidance from the U.S. Centers for Disease Control and Prevention said fully vaccinated people no longer need to wear masks outdoors and can avoid wearing them indoors in most places.

Chips gave a lift to the technology sector , extending gains in the wake of a Reuters report that lawmakers in Washington are close to unveiling a $52 billion dollar proposal to aid U.S. microchip production.

First-quarter earnings season is nearing its final curtain, with 457 constituents of the S&P 500 having posted results. Of those, 87% have beaten consensus estimates, according to Refinitiv IBES.

Analysts now see annual S&P earnings growth of 50.6%, in aggregate, for the Jan-March period, more than triple the rate forecast at the beginning of the quarter, per Refinitiv.

Major retailers Walmart, Home Depot, Target, Lowe's and others are on the docket next week.

Walt Disney Co shares were driven down 2.6% after subscriber additions to its streaming service fell short of expectations.

Advancing issues outnumbered declining ones on the NYSE by a 4.63-to-1 ratio; on Nasdaq, a 4.58-to-1 ratio favored advancers.

Volume on U.S. exchanges was 9.50 billion shares, compared with the 10.50 billion average over the last 20 trading days.