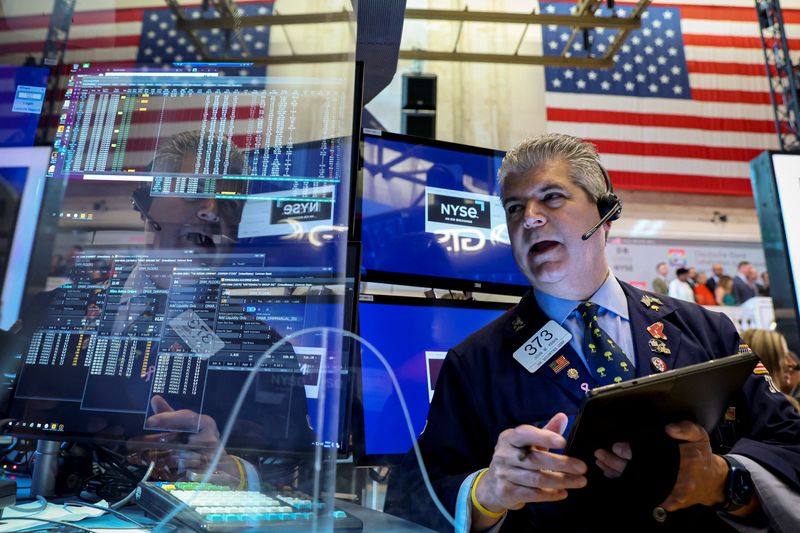 NEW YORK (Reuters) - Wall Street bounced back to a sharply higher close in light trading on Friday as investors embarked on the second half of the year ahead of the long holiday weekend.

All three major U.S. stock indexes reversed early losses to end in well into positive territory in the wake of the stock market's worst first half in decades.

Still, all three indexes posted losses for the week.

"We're headed into the holiday weekend and having a late-day relief rally," said Joseph Sroka, chief investment officer at NovaPoint in Atlanta. "But we’ll likely have to wait until investors return from the holiday weekend to see if it’s sustainable at the start of the new quarter."

Worries over waning demand in the face of decades-high inflation were reflected in the Institute for Supply Management's (ISM) purchasing managers' index, which showed a deceleration in both new orders input prices.

ISM's report seemed to back the view that the economy is cooling and inflation appears to be past its peak. This has raised the possibility that the Fed might have wiggle room for a dovish pivot after its second straight 75 basis point interest rate hike expected in July.

"The Fed is going to need to see a lot more evidence to change its mind about further continued interest rate hikes," said Tim Ghriskey, senior portfolio strategist Ingalls & Snyder in New York. "There’s still a lot of uncertainty about the economy and inflation despite early signs that inflation may have peaked."

All 11 major sectors of the S&P 500 ended the session green, with utilities enjoying the largest percentage gain.

Second-quarter reporting season begins in several weeks, and 130 of the companies in the S&P 500 have pre-announced. Of those, 45 have been positive and 77 have been negative, a weaker negative/positive ratio than a year ago, according to Refinitiv data.

The prospect of profit margins taking a hit from bruising inflation and waning consumer demand will have market participants listening closely to forward guidance.

Analysts now expect aggregate second-quarter S&P 500 earnings growth of 5.6%, down from the 6.8% projected at the beginning of the quarter, per Refinitiv.

Advancing issues outnumbered declining ones on the NYSE by a 2.77-to-1 ratio; on Nasdaq, a 1.57-to-1 ratio favored advancers.

Volume on U.S. exchanges was 11.01 billion shares, compared with the 12.88 billion average over the last 20 trading days.