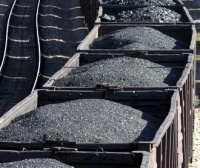 Alpha Natural Resources (NYSE: ANR) is leading the S&P 500 higher by a wide margin Thursday, after dropping 8.7 percent Wednesday on second-quarter 2012 earnings results and outlook. Shares are up 11.9 percent, versus a 6.4 percent gain for also-ran E*TRADE Financial. The gain is also leading the coal sector higher, as represented by the 2.5 percent gain in Market Vectors Coal ETF (NYSE: KOL).

The boost comes on the heels of James River Coal (Nasdaq: JRCC) news, which reported better than expected Q2 results earlier, with a loss of 74 cents per share narrower than consensus estimates. James River is trading well over 10 percent better on the session.

One key element for a potential rebound is China. The largest producer and consumer of coal for energy reported a slowing in CPI for July, to 1.8 percent growth from 2.2 percent in June and well under July 2011's reading. The lower number sets the table for potentially more stimulus measures, such as the two key interest rate cuts China made in May and June of this year. Those were the first cuts since 2008, ahead of the financial meltdown.

Overall, inflation growth slowed to 7.6 percent in the second-quarter, a three-year low.

Most don't see a recovery in China starting until the second-half of 2012, meaning coal probably won't see any big gains until early to mid 2013.

James River noted that Central Appalachian (CAPP) coal prices rose $114.83 per ton from May to August 8th, though contracts were little changed for 2013 and 2014. CEO Peter Socha commented: "The met market has softened recently due to global macroeconomic concerns and a slight oversupply situation. We are cautious about the met market in the short term, but continue to be very enthusiastic about the demand for these coals going forward. The construction of global infrastructure is continuing. The thermal market is just beginning to show signs of recovery. We believe that this is due to production cutbacks throughout the industry as well as improved demand for both coal and natural gas due to warmer than normal temperatures."

Again, this is coming from one coal producer. Let's see what Alpha CEO Kevin Crutchfield said with its quarterly report: "These are extremely challenging times in the U.S. coal industry, with softness in both the thermal and now the metallurgical coal markets and the pace at which the fundamentals changed. Alpha has taken decisive actions to ensure that our business is both well-suited to today's demand environment and efficient enough to provide us with the flexibility to ramp-up our world-class asset base once market conditions improve. We have continued to optimize our Central Appalachia operations by adjusting our footprint, idling high cost thermal coal and lower-quality metallurgical coal production while focusing on our higher-margin metallurgical products."

Eesh, but, the company continued: "Thermal coal consumption in 2012 is expected to decrease by more than 120 million tons compared with last year, and spot prices for thermal coal in Central Appalachia and the Powder River Basin (PRB) have languished at levels below each basin's typical cash production costs. However, the domestic thermal coal market is showing signs of gradual improvement."

Whether you believe it or not, coal miners/producers are looking a little more peppy Thursday: