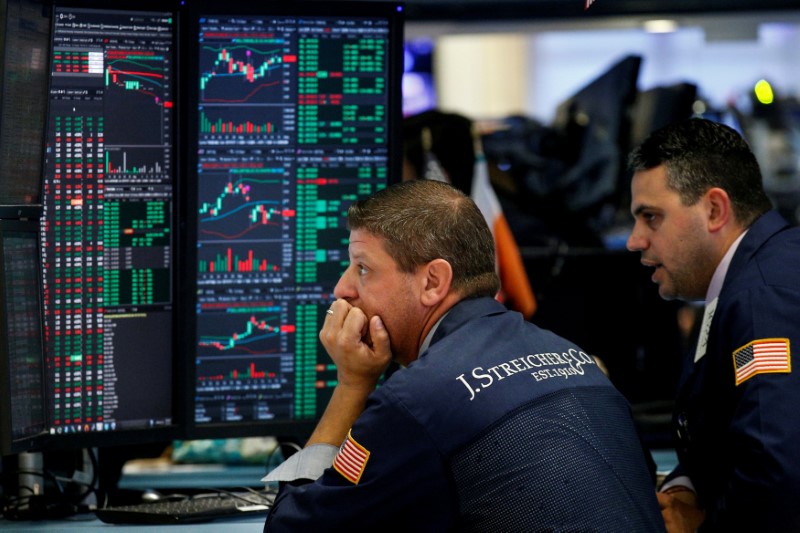 (Reuters) - Wall Street's Dow industrials climbed to a record high on Thursday while losses in Facebook kept the S&P 500 and the Nasdaq in check as investors assessed the long-awaited tax cut plan unveiled by U.S. President Donald Trump's fellow Republicans.

The bill called for slashing the corporate tax rate to 20 percent from 35 percent but also ending certain tax breaks for companies and individuals.

While many market watchers have pointed to a corporate tax cut as further fuel for a record-setting run for equities, investors said the bill was just a starting point with significant negotiations likely ahead.

âThe message from the market is there are still a lot of unknowns out there,â said William Delwiche, investment strategist at Baird in Milwaukee. âItâs kind of hard to draw too many conclusions at this point from what exactly the bill will end up being.â

In the regular session, U.S. housing sector stocks tumbled amid concerns over the tax plan's cap on deductions for mortgages.

Powell has supported current Chair Janet Yellen's general direction in setting monetary policy and has been viewed as relatively dovish on interest rates.

âI think he was a dovish choice, which probably gave a greater comfort level to investors on Wall Street, although I think his selection had already been baked into the market,â said Chuck Carlson, chief executive officer at Horizon Investment Services in Hammond, Indiana.

Third-quarter earnings season was also in focus, with investors citing corporate profit growth as supporting the market's rally in 2017.

With more than three-fourths having reported, S&P 500 companies are expected to have increased profits by 7.7 percent in the third quarter, up from an expectation of 5.9 percent growth at the start of October, according to Thomson Reuters I/B/E/S.

Facebook shares fell 2.0 percent as investors shrugged off strong quarterly results and worried about the social media company's spending. The stock was the biggest drag on the S&P 500 and Nasdaq.

Tesla Inc (NASDAQ: TSLA) shares dropped 6.8 percent after the carmaker pushed back its production target for its Model 3 sedan and reported its biggest quarterly loss ever.

Declining issues outnumbered advancing ones on the NYSE by a 1.06-to-1 ratio; on Nasdaq, a 1.29-to-1 ratio favored advancers.

About 7.4 billion shares changed hands on U.S. exchanges, well above the 6.2 billion daily average over the last 20 sessions.