S&P 500 rises on economic recovery and vaccine hopes, pulls back from highs 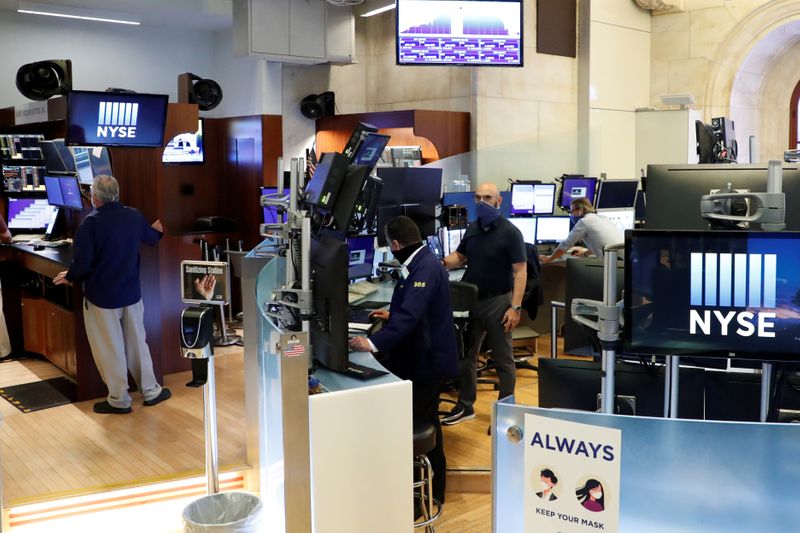 Traders work inside posts, on the first day of in-person trading since the closure during the coronavirus disease (COVID-19) outbreak on the floor at the New York Stock Exchange (NYSE) in New York, U.S., May 26, 2020. REUTERS/Brendan McDermid

New York (Reuters) - U.S. stocks closed higher on Tuesday on optimism about the development of coronavirus vaccines and a revival of business activity, but the S&P 500 failed to hold above the key psychological level of 3,000 points.

Stocks pared gains late in the session, after Bloomberg News reported the Trump administration was weighing a range of sanctions on Chinese officials, businesses and financial institutions, reinforcing comments earlier in the day from White House adviser Larry Kudlow.

Kudlow said President Donald Trump was "so miffed with China on virus and other matters that the trade deal is not as important to him as it once was."

The benchmark S&P 500 <.SPX> had crossed 3,000 for the first time since March 5 before dropping back late in the session.

The S&P 500 has risen as much as 37.9% from its March 23 low due to central bank and government stimulus at a time when the U.S. economy is seeing its biggest job losses since the Great Depression of the 1930s. It closed 11.7% below its Feb. 19 record high.

On Monday, California, which has had one of the country's most restrictive shutdowns, said it would allow retail businesses to offer in-store shopping and places of worship to reopen.

"When you add the news all together everyone's getting a boost," Snyder said.

Data showed U.S. consumer confidence nudged up in May, adding to hopes that the worst of the economic impact of the shutdown is in the past.

While all 11 S&P sector indexes were higher for much of the day, the technology <.SPLRCT> and healthcare <.SPXHC> sectors ended slightly lower. Still, sectors such as financials <.SPSY> and industrials <.SPLRCI> charged ahead with gains of 5% and 4%, respectively.

A comment from JPMorgan's Dimon suggesting that the bank may not need to increase its reserves in the second half of the year was a boost for the financial sector as well as the broader market, according to Citi's Snyder.

JPMorgan (NYSE: JPM) shares closed up 7%, making it the biggest boost for the financial sector.

While macroeconomic data was pointing at a deep recession, Citi's Snyder was focused on the recovery. But he questioned how much further the market would rise with the U.S. presidential election in November and simmering U.S.-China tensions.

"The returns from here will be harder to come by," he said.

The New York Stock Exchange on Tuesday partially reopened its trading floors at the iconic 11 Wall Street building, which had been closed since March 23.

Advancing issues outnumbered declining ones on the NYSE by a 4.91-to-1 ratio; on Nasdaq, a 2.35-to-1 ratio favored advancers.

On U.S. exchanges 12.11 billion shares changed hands compared with the 11.26 billion average for the last 20 sessions.