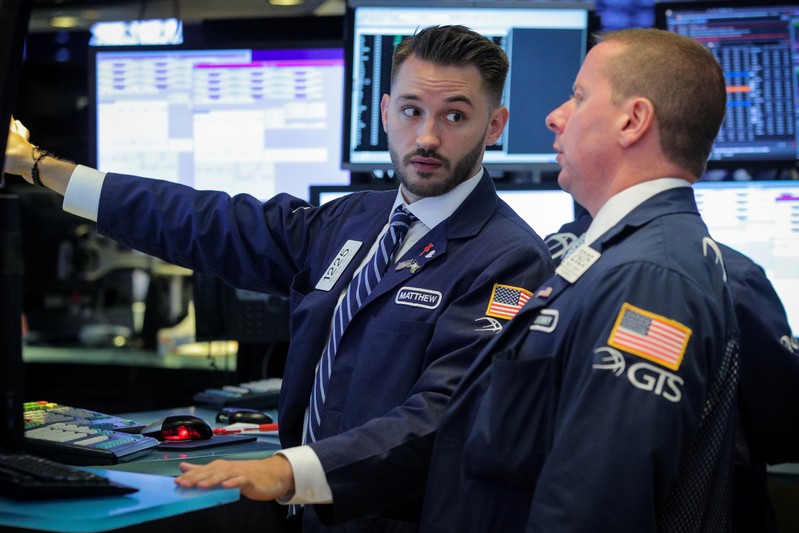 NEW YORK (Reuters) - U.S. stocks rose on Wednesday, with each of the major indexes closing at a record high, as expectations grew that the Federal Reserve would take a more dovish turn as a raft of data provided more evidence of a slowing economy.

Data on Wednesday showed the U.S. trade deficit jumped to a five-month high while services sector data showed a slowdown in activity. The reports come on the heels of data on housing, manufacturing, business investment and consumer spending that point to slowing economic growth in the quarter.

"The data has been mixed, it hasnât been terrible, sort of a decline generally," said Thomas Martin, senior portfolio manager at Globalt Investments in Atlanta, Georgia.

"Certainly the bond market is continuing to hit fresh yield lows so that is a message there is a definite slowing and the central banks will have to cut. I guess the equity markets are saying that is going to be OK."

The defensive utilities <.SPLRCU>, real estate <.SPLRCT> and consumer staples <.SPLRCS> rose the most among the 11 major S&P sectors as the falling bond yields made stocks that pay high dividends more attractive. The dividend yield for the broad S&P 500 and the 10-year Treasury are nearly identical.

Traders currently see a 29.7% chance the Federal Reserve would cut borrowing costs by half a percentage point at its July 30-31 policy meeting, up from the 25% perceived chance on Tuesday and 24% a week ago. A cut of at least a quarter percentage point is viewed as a certainty.

The Atlanta Fed on Wednesday trimmed its second-quarter GDP growth view to 1.3% on an annualized rate, down from 1.5% on Monday.

Trading volumes were thin due to shortened trading hours on Wednesday ahead of the July Fourth holiday. About 4.15 billion shares changed hands in U.S. exchanges, compared with the 6.89 billion daily average over the last 20 sessions.

Additional data on the labor market showed the ADP National Employment Report, considered by some to be a precursor to the Labor Department's more comprehensive monthly nonfarm payrolls data due on Friday, showed U.S. private employers added 102,000 jobs in June, well below economists' expectations.

Among stocks, Symantec Corp (NASDAQ: SYMC) surged 13.57%, the most on the S&P, after sources told Reuters that chipmaker Broadcom Inc (NASDAQ: AVGO) is in advanced talks to buy the cybersecurity firm. Broadcom fell 3.5%.

Tesla Inc (NASDAQ: TSLA) rose 4.61% after the electric carmaker set a record for quarterly vehicle deliveries after months of questions about demand for its luxury electric cars.

Advancing issues outnumbered declining ones on the NYSE by a 2.64-to-1 ratio; on Nasdaq, a 1.85-to-1 ratio favored advancers.