Voss Capital, LLC ("Voss"), a significant shareholder of Griffon Corp. (NYSE: GFF) ("Griffon" or the "Company"), today issued an open letter to Griffon shareholders, which responds to several misleading statements and mischaracterizations made by Griffon in its recent investor presentation. 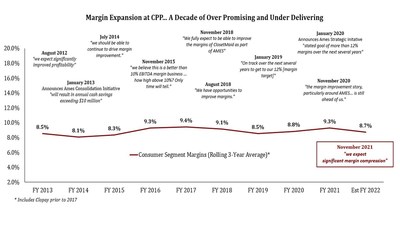 We have been encouraged by the positive investor response to our recent presentation that highlights the urgent need for change at Griffon, including our step-by-step plan for unlocking the value that is currently shrouded by Griffon's conglomerate structure, outsized management compensation and a lack of true Board independence.

Sadly, Griffon's executive team and Board have been unwilling to acknowledge the need for change. Instead of providing logical, accurate responses to the issues we have raised, the Company has chosen to be confrontational since our very first meeting. The Company's recently released investor presentation and letter attempt to mislead investors by cherry-picking benchmarks, metrics, and time periods. This is a blatant attempt to justify executives' oversized compensation and the Company's value destructive strategy. The Company also failed to address several key issues raised in our deck including chronically low ROIC, the lack of margin expansion at CPP, sustained underperformance relative to peers, peer-leading management compensation, dismal of say-on-pay results, and ISS's and Glass Lewis' repeated criticisms of the company's corporate governance and compensation. Below we highlight just a few of the deceptive and outright false statements the Company has made.

"Purposeful strategy to create a balanced portfolioâ¦ the five-year evolution of our business that led to the sale of our Plastics division in 2018 continues with the review of strategic alternatives and sale process underway for our Defense Electronics business, which began in April 2021, and our successfully completed acquisition of Hunter Fan Company."

The Company intimates that it has undergone a deliberate strategic portfolio repositioning over the past few years with the sale of Plastics and the recently announced sale of Defense. The reality is the Plastics divestiture was the result of an unexpected and unsolicited inbound offer.

"Look, we weren't looking to sell Clopay Plasticsâ¦ Let me be clear. We're responding to an inbound inquiry on the sale of Clopay Plastics." â CEO Ron Kramer on M&A Call September 6th, 2017

Furthermore, Griffon oversaw a 38% decline in Defense revenue before announcing a sale. Had selling Defense been part of some deliberate value creation plan, the Company would have sold Defense before such a large decline. The proposed sale now is merely a long overdue recognition that the Company has not properly run that business, and a belated attempt to recover some value for it.

It is easy to improve margins through buying higher-margin businesses, such as Hunter Fan. What Griffon's deck neglects to demonstrate is what proportion of margin improvement is actually attributable to high-margin acquisitions versus internal improvements once a company was acquired. We suspect internal improvements are relatively small, as shown by results at CPP.

The Company has discussed expanding margins at CPP for at least a decade during which time there has been zero sustained margin improvement. This management team has no credibility when it comes to forecasting their own business and continues to make baseless promises that they are clearly unable to fulfill.

"Voss' interests are not aligned with those of other shareholders."

We own the same stock as every other Griffon shareholder. We are seeking what every shareholder is seeking: value creation. If anyone is not aligned with other shareholders, it's the Griffon management team who is incentivized with bonus metrics that directly conflict with shareholders' best interests. Despite owning a significant amount of Griffon stock, their actions only seek to protect the ~$30 million per year they receive to maintain the status quo at the expense of Griffon shareholders. In other words, why should they work to create value for all shareholders when they will be paid handsomely either way? With a negative TSR over the last five years despite an ongoing housing and remodeling boom, it is clear this management team and Board lack the ability to create sustainable value. Management's herculean effort to keep any truly independent Board members out of the boardroom is indicative of its fear that an independent member would provide stronger oversight, including of executive pay.

This is LinkedIn-style corporate jargon devoid of substance. The Company is clearly unable to quantify any discernable value that the conglomerate structure provides. Of the nearly $50 million in annual corporate overhead expense, over 60% is compensation for the top four named executive officers at Griffon despite each of the underlying businesses having fully built out management teams. For example, CPP has a segment President as well as its own COO, CFO, General Counsel and Corporate Controller. We wonder what level of "executive leadership" is needed when each segment already has all the necessary functions covered, and if this executive leadership is worth the $50 million per year it's costing us as shareholders.

"Griffon has consistently engaged in good faith with Voss"

The company's approach to our engagement has been anything but "in good faith." Following our meeting with Griffon Board members on November 9th, both sides agreed to send each other several information items, as well as the framework for a settlement agreement. Within 72 hours, Voss followed through on our commitment, sending both the requested information and a proposed settlement agreement. We never received the agreed upon information or a counteroffer from the Board. It was only after this lack of responsiveness that we decided to highlight our concerns publicly.

The Company shows its TSR under current management's tenure as 431% compared to 316% for the Russell 2000.

This statement demonstrates either pure mathematical incompetence or a deliberate attempt to mislead shareholders, neither of which can be construed positively.

First, Griffon's total shareholder return is not 431% over this time frame as shown on slide 42 in their presentation, but is in fact 100 percentage points lower at 331%.

Third, in every annual report for the past 17 years, the Company has compared its total shareholder return to the S&P 600 index, never once mentioning the Russell 2000 index. The reason Griffon chose to now switch to the Russell 2000 in this presentation is clear: Griffon's total shareholder return has underperformed its own self-selected broad benchmark, the S&P 600, by 72% under management's tenure and by 66% over the past five years.

Our recent investor presentation devotes an entire section, 11 pages, to our five-part plan. Our plan clearly lays out a path to unlocking over $50 per share in value for Griffon shareholders and includes sustainable operational improvements, cost-cutting initiatives and an optimized corporate structure.

By contrast, the Company continues to offer shareholders the same old strategy which has generated poor shareholder returns and low ROIC, with unfathomably high overhead.

Throughout their presentation, the Company touts "$60 million returned to shareholders since September 2018." This equates to $1.06 per share. So, while it hasn't been "quick", a "buck" more aptly describes what Griffon management has provided to shareholders over the past three years. It's also worth noting $60 million is far less than what the two top executives have personally pocketed over the same period.

There is a difference between "shining a light" and taking action. Mr. Kramer is continually telling shareholders that he believes HBP is worth a "mid-teens" EBITDA multiple. However, HBP never has and never will receive that valuation under Griffon's existing conglomerate structure. The Company's presentation included a chart showing an extensive list of recent transactions that have occurred in the building products space. The median 11.8X EV/EBITDA multiple of those transactions is on par with our projection for what HBP could realize in a sale. Such a multiple reinforces our view that the company must explore all strategic options for its HBP segment in order to realize its value.

With the value of the business now clear and, we urge the Board to fulfill its fiduciary duty to all shareholders to maximize value by exploring all options.

"That success, however, could be derailed by the election of the nominee from Voss Capital LLC to our Board, which we believe would disrupt Griffon's substantial progress and business momentum, and diminish the quality and strength of our Board."

Griffon's Total Shareholder Return is -5% over the last five years. How is that "substantial progress?"

The idea that one board member out of 14 could "derail" a company's progress is laughable but we do appreciate the Company's acknowledgment that our candidate Charlie Diao would in fact be able to exert influence in the Boardroom.

"Griffon has proactively engaged with shareholders around ESG."

The reality is Griffon has not been responsive to shareholder concerns surrounding executive compensation. Despite the benefit of the insider ownership, as well as its large ESOP Plan, the Company has seen recurring shareholder dissatisfaction over its pay practices. The Company only spoke to shareholders owning 9% of outstanding shares in all of 2021. This is a surprising fact considering the number of Griffon institutional shareholders that have not only voted against Say on Pay, but also against unopposed incumbent Board members.

We also find the Company's claim of responsiveness on governance matters to be a misleading characterization of minor changes made only after our suggestions. One touted improvement is reducing the special meeting threshold to 25%. This appears to be a hollow attempt to placate shareholders, especially considering the Company retains super-majority voting provisions. Furthermore, according to the Company's own proxy statement, the Nominating and Corporate Governance Committee only met once in all of Fiscal 2021. It wasn't until Voss engaged with the Company and recommended numerous governance reforms that the Company acted.

In this letter we have discussed what is in Griffon's presentation. Perhaps even more interesting is what is not in the Company's presentation. The Company never once addressed many of the most important shareholder concerns, including chronically low ROIC, the lack of margin expansion at CPP, sustained underperformance relative to peers, peer-leading management compensation, dismal say-on-pay results, and ISS's and Glass Lewis' repeated criticisms of the company's corporate governance and compensation.

We believe Charlie Diao will provide a much-needed independent voice and oversight in the boardroom. He will provide value from day one.

More information on our case for change, plan for value creation and voting instructions can be found on www.renovategriffon.com. 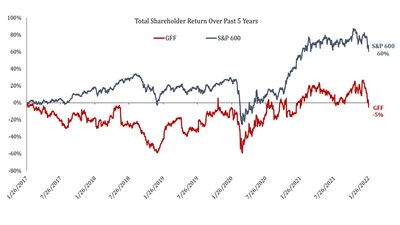 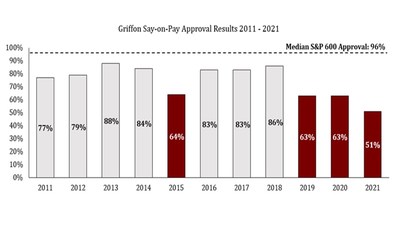