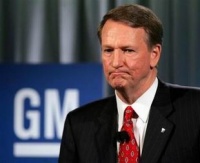 As part of the loan, GM will agree to limits on executive compensation and bonuses and must terminate golden parachute agreements. GM must also agree to divest itself of private aircraft.

By February 17, 2009, GM needs to submit to the President's Designee a plan to achieve and sustain the long-term viability, international competitiveness and energy efficiency of the Company.

GM must also reduce their outstanding unsecured public indebtedness by not less than two-thirds through conversion of existing public debt into equity or debt.

GM must also reduce the total amount of compensation, including wages and benefits, paid to their U.S. employees so that, by no later than December 31, 2009, the average of such total amount, per hour and per person, is an amount that is equal to the average total amount of such compensation, as certified by the Secretary of Labor, paid per hour and per person to employees of with Nissan Motor Company, Toyota Motor Corporation, or American Honda Motor Company whose site of employment is in the United States.

GM must also eliminate the payment of any compensation or benefits to U.S. employees of the Company or any subsidiary who have been fired, laid-off, furloughed, or idled, other than customary severance pay.

Under the terms of the commitment, the UST will receive warrants to purchase common shares of the Company. The total number of warrants will be equal to 20% of the Maximum Loan amount divided by the Exercise Price per Share, provided that the number of Warrants will be capped at 20% of the issued and outstanding common equity interests of the company, before giving effect to the exercise of the
Warrants.