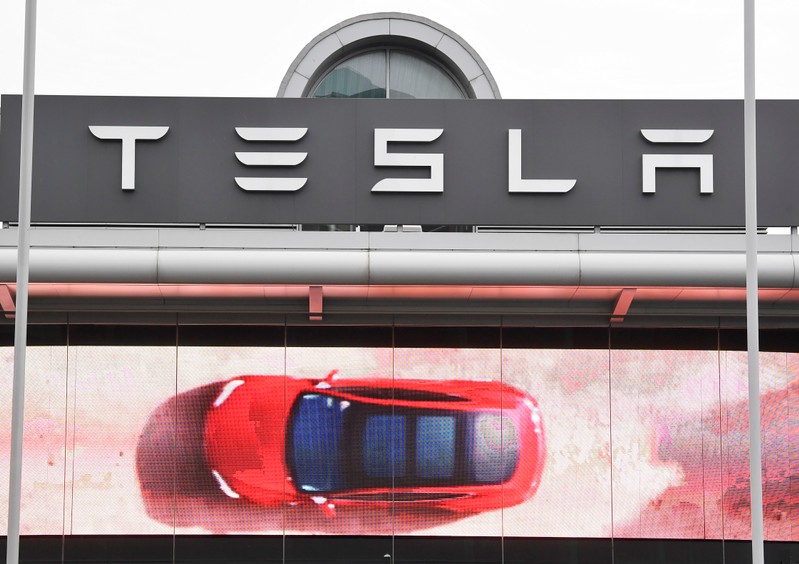 An advertising screen is seen outside a Tesla showroom in west London, Britain, March 1, 2019. REUTERS/Toby Melville

(Reuters) - Electric carmaker Tesla Inc backed off its plan to close all of its U.S. stores in a blog post https://www.tesla.com/en_NZ/blog/update-tesla-stores-and-pricing?redirect=no and instead will raise prices of its high-end vehicles by about 3 percent on average, as it strives for profitability.

The company said late Sunday that it would now be closing only about half as many stores than initially planned in a widely criticized move earlier this month to cut overhead and shift its whole distribution network online.

"Over the past two weeks we have been closely evaluating every single Tesla retail location, and we have decided to keep significantly more stores open than previously announced," the electric carmaker said.

"As a result Tesla will need to raise vehicle prices by about 3 percent on average worldwide."

Separately, Chief Executive Officer Musk has until the end of the day on Monday to explain why he should not be held in contempt for recent tweets that U.S. securities regulators say violated a September fraud settlement.

The case is the latest major challenge by authorities to Musk's leadership as Tesla seeks to make good on his promises to Wall Street that it will soon by consistently profitable and will not need more capital.

The three percent increase on its top-end cars would be the first hike in prices after a series of cuts over the past year aimed at offsetting a reduction in green tax credits and the impact of rising tariffs overseas.

Tesla said the worldwide price increases would apply to the more expensive versions of the Model 3, Model S and Model X, and that there will be no price increase to the $35,000 Model 3.

The carmaker said potential buyers can place orders until March 18 at the old prices. Currently, the Model S and Model X models are priced starting at $79,000 and $88,000 before savings, respectively.

Shares of the company, among Wall Street's most volatile in recent months, were roughly flat in early trading on Monday.

Cost savings from store closing will be only about half the expected amount as the company will close only half the number of stores planned, it said. A few stores in high-visibility locations that were closed because of low throughput would be reopened with a smaller Tesla crew and would carry fewer cars in inventory.

Separately, Bloomberg reported on Monday that Tesla is in discussions with Chinese battery maker Contemporary Amperex Technology Co Ltd on a deal for the production of rechargeable batteries for the Model 3.

In January, sources told Reuters that Tesla had signed a preliminary agreement with China's Tianjin Lishen to supply batteries for its new Shanghai car factory.

The talks come as Tesla looks to localize battery cell production and push forward with the 500,000-vehicle-capacity Shanghai plant, expected to be completed in May.

(Reporting by Sonam Rai and Rishika Chatterjee in Bengaluru; Editing by Patrick Graham and Bernard Orr)