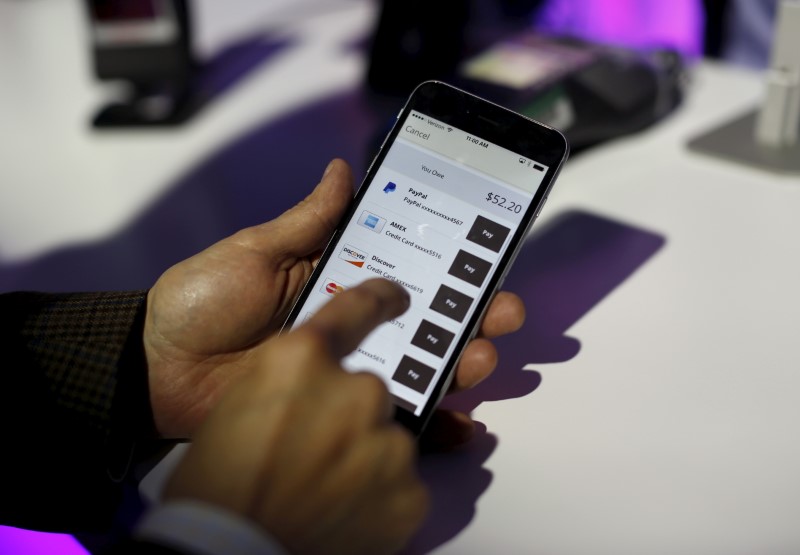 FILE PHOTO: A payment is made on a mobile device during a PayPal demonstration at Terra Gallery in San Francisco, California May 21, 2015. REUTERS/Robert Galbraith/File Photo

By Anna Irrera and David Henry

NEW YORK (Reuters) -PayPal Holdings Inc will lift merchant costs for its branded payment products while cutting those for behind-the-scenes processing of some Visa and Mastercard transactions, a bold move in an increasingly competitive digital payments sector.

The strategic shift reflects PayPal's growing power in online transactions, which surged during the COVID-19 pandemic. As consumers and businesses flocked to the company, a market leader, during lockdown, its active accounts mounted to 377 million, more than twice as many as in 2015.

The company said the move reflected the value of its proprietary services, with consumers nearly three times as likely to complete a purchase when PayPal products are available at checkout, while users of the new buy-now-pay-later option spend an average of 15% more.

"We are changing prices to help our customers understand even more clearly where we provide value," Dan Leberman, PayPal's senior vice president for small and medium business and partners, said in an interview.

"The wallet is of tremendous value; the card processing is commoditized."

PayPal will charge sellers 3.49% plus 49 cents to process transactions made through its proprietary products, including its button on merchant websites and its digital wallet, according to material the company shared with Reuters.

The higher rate applies to products like PayPal Checkout, Pay with Venmo, PayPal Credit and new buy-now-pay-later offering Pay in 4.

It will be hard for merchants to know how much extra value they are getting from PayPal features in exchange for the higher rates, said Ben Dwyer, the founder of cardfellow.com who analyzes processing deals offered to merchants.

"PayPal wants to be a comprehensive payment solution, but it is tough to get there by selling on value over price."

Sellers will pay 2.59% plus 49 cents for PayPal to process, unseen by consumers, online payments made with Visa and Mastercard debit and credit cards from other companies.

In the past, PayPal charged sellers 2.9% plus 30 cents for payments on most online transactions, regardless of its role.

"We think it's a bold price to come out with," he said.

As large merchants tend to negotiate unique deals, rate hikes will largely affect small-to-medium sized businesses, some of which have lost confidence this year due to a nationwide labor shortage and inflation worries.

The changes largely reflect services PayPal has developed since splitting from eBay Inc in 2015.

Although most of its transactions are online, PayPal will also reduce prices for in-person transactions through its network, which should help it compete with Square Inc.

PayPal's business boomed during the pandemic as more homebound consumers spent online. It processed $285 billion in payments in the first quarter, up 49% from the year-earlier period.

"It's more than just pricing," said Aaron Press, an analyst at research company IDC. "They are making sure the market understands that they should be thinking of PayPal as a comprehensive payments strategy and not just one form of payment."