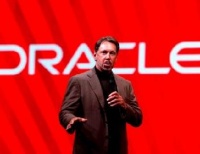 After jumping more than a percent over the last hour of Tuesday's intraday session, Oracle (Nasdaq: ORCL) shares are continuing higher in post-market trade following a quarterly beat on both the top and bottom lines.

The company said third-quarter sales rose 3 percent from $8.76 billion in the same quarter last year to $9.04 billion. Analysts were expecting revenue of $9.02 billion during the latest quarter.

Sales in the Americas rose 4.4 percent from the third quarter of 2011, sales in Europe, Middle East & Africa fell almost 1 percent, and revenue within Asia Pacific was up about 7 percent.

Oracle's Mark Hurd said, "Hardware revenue for our engineered systems grew 139% this quarter and going into Q4, we have a record pipeline. In applications, Fusion in the Cloud is winning with great success against niche HCM cloud vendors in the US and worldwide. Our modular, integrated platform of 100 apps available in the cloud or on-premise is a key differentiator."

Safra Catz, Oracle's President and CFO said, "Oracle is on track to deliver the highest operating margins in our history this year," said Oracle President and CFO, Safra Catz. "Oracle can achieve these record margins as an integrated hardware and software company because we are focusing on high margin systems where hardware and software are engineered to work together."

UPDATE: the company is looking for Q4 sales to be down 2 percent to up 2 percent. EPS are expected to be in the range of 78-83 cents.