Hancock Jaffe Laboratories, Inc. (NASDAQ:HJLI, HJLIW), a developer of medical devices that restore cardiac and vascular health, announced today that two additional VenoValve patients from HJLI's first-in-man, clinical study in Colombia have now reached the one-year milestone following VenoValve surgery, and that chronic venous insufficiency ("CVI") has significantly improved in both patients when compared to pre-surgery levels. For the two additional patients that are now one-year post VenoValve surgery, including one patient that is 86 years old, reflux (the backwards flow of blood) has improved an average of 62%, Venous Clinical Severity Scores ("VCSSs") have improved an average of 42%, and pain, as measured on a visual analog scale ("VAS") improved an average of 79%.

Eight VenoValve patients have now completed the one-year first-in-human trial. For the seven patients with working VenoValves, reflux, VCSS, and VAS are 57%, 55%, and 64% respectively, at one year, compared to pre-surgery levels. On average, the seven patients showed an 8 point improvement in VCSS scores at one year, compared to pre-surgery levels. In one patient, the VenoValve stopped working (occluded) after 90 days due to the patient's failure to continue to take the appropriate dosage of anticoagulation medication. 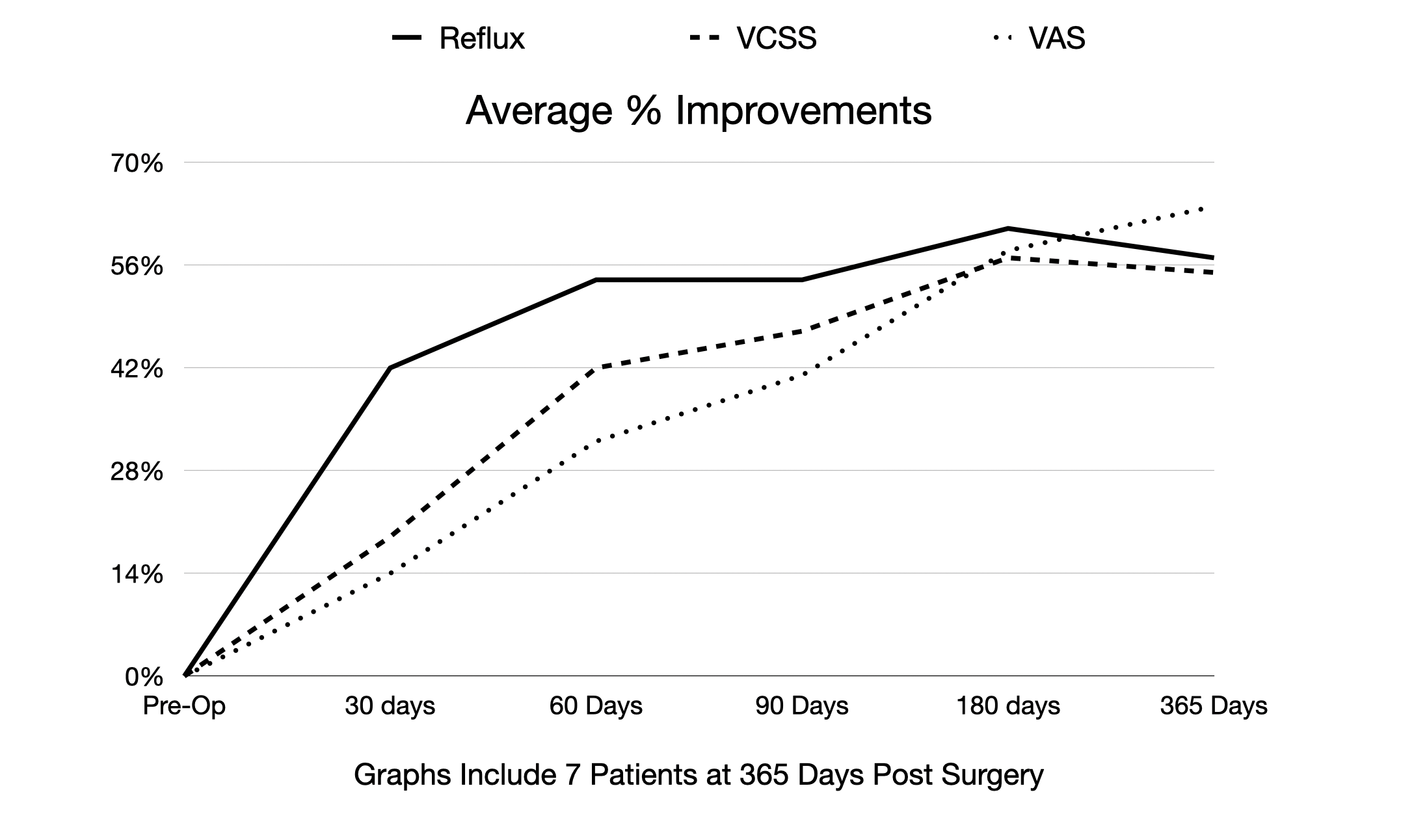 The improvements in VCSS scores is significant and indicates that VenoValve patients who had severe CVI pre-surgery, now have mild CVI or the complete absence of disease at one-year post surgery. VCSS scores are commonly used to objectively assess clinical outcomes in the treatment of venous disease, and include ten characteristics including pain, inflammation, skin changes such as pigmentation and induration, the number of active ulcers, ulcer duration and ulcer size. None of the VenoValve patients experienced ulcer recurrence during the one-year period post-surgery. Venous ulcer recurrence is common for patients suffering from deep venous CVI.

Dr. Marc H. Glickman, Hancock Jaffe's Senior Vice President and Chief Medical Officer stated, "An 8 point average decease in VCSS scores after one year post-surgery is a significant improvement that will garner a lot of attention among the vascular community. It is extremely gratifying when as a result of the VenoValve, the pain score, that is graded on a scale, of one to ten, goes from an 8 pre-surgery to 1 at one year post VenoValve surgery, for an 86 year old patient that has suffered from severe CVI for more than 30 years."

CVI occurs when the valves in the veins of the leg are injured or destroyed, causing blood to flow backwards, which is known as reflux. Reflux results in increased venous pressure (venous hypertension), damage to the veins, and results in the pooling of blood in the lower leg. Deep venous CVI is a serious condition, often resulting in debilitating pain, swelling, and open sores (venous ulcers) on the lower leg. HJLI has implanted VenoValves in 11 patients over the course of a year as part of its first-in-man, Colombian study, which is the pre-cursor to the U.S. pivotal trial. Data is being reported today for the first eight VenoValve patients to reach the critical, one-year milestone. The eight VenoValve patients that are one-year post surgery have now completed the first-in-man, clinical study and this phase of the VenoValve study will conclude in December when the three remaining patients are all one year post surgery.

Next steps for the VenoValve include the continued monitoring of the remaining three VenoValve patients in Colombia, the completion of a series of functional tests mandated by the U.S. Food and Drug Administration ("FDA"), and the filing of an IDE application with the FDA seeking approval to begin the U.S. pivotal trial, which HJLI expects to file in the first quarter of 2021.

Approximately 2.4 million people in the U.S. suffer from CVI due to reflux in the deep venous system. Estimates indicate that direct medical costs from CVI in the U.S. exceed $38 Billion a year. There are currently no FDA approved devices, or effective treatments for deep venous CVI.