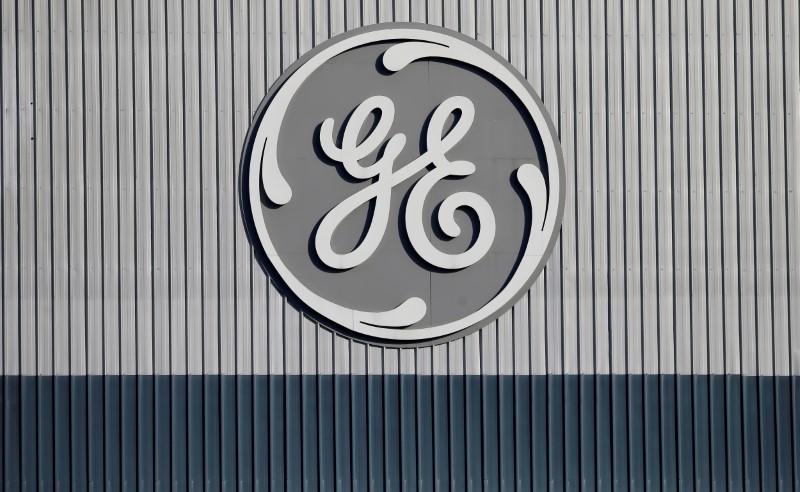 FILE PHOTO: The logo of U.S. conglomerate General Electric is pictured at the site of the company's energy branch in Belfort, France, February 5, 2019. REUTERS/Vincent Kessler/File Photo

PARIS (Reuters) -General Electric and France's Safran has unveiled plans to test-build an open-bladed jet engine able to reduce fuel use and emissions by 20% as they prolonged their historic CFM International joint venture by a decade to 2050.

The "RISE" engine, positioned as a possible successor to the "LEAP" model used on the Boeing 737 MAX and some Airbus A320neo, will feature a design with visible fan blades known as open-rotor and could enter service by the mid-2030s.

The system will contain hybrid-electric propulsion and be capable of running on 100% sustainable fuel or hydrogen, an energy source favoured by Airbus for future concepts.

CFM is the world's largest jet engine maker by the number of units sold. It is the sole engine supplier for the Boeing 737 MAX and competes with Raytheon Technologies unit Pratt & Whitney for airline engine selections on the Airbus A320neo.

The technology demonstrator project comes as the industry prepares to battle over the next generation of single-aisle planes like the MAX and A320neo in the busiest part of the airplane market while facing mounting environmental pressure.

Industry sources have said Boeing is considering launching a replacement for its slightly larger and long-range single-aisle 757 that could pave the way for a replacement of the MAX.

But it has deferred a decision on whether to move relatively quickly - a step that would require an available conventional engine - or wait for the arrival of technology like open-rotor with hybrid propulsion, Reuters reported recently.

GE Aviation Chief Executive John Slattery said CFM would be ready to compete for whatever jet might be launched and challenged other engine makers to compete with the technology.

"If Boeing or any airframer launches a platform and the business case makes sense for us, then we will present our best aggregate technologies that we have at that moment in time," he told a news conference on Monday.

Boeing said it regularly conducted technology studies and collaborated with suppliers. It gave no fresh indication whether open-rotor technology could power its next jetliner.

Airbus, which says it is working on a zero-emission plane to enter service in 2035, said on Tuesday it welcomed the fact that the engine was expected to be "agnostic" about the type of fuel.

"We await news of where Airbus and Boeing are headed," Jefferies analyst Sandy Morris said.

Safran shares rose 1.6% early on Tuesday, buoyed also by signs of a truce in an aircraft trade war.

The open-rotor engine concept places previously hidden whirring parts on the outside of the engine to capture more air and reduce the burden on the engine's fuel-burning core.

Previous attempts since the 1980s to develop such engines have had to contend with concerns including noise.

Safran Chief Executive Olivier Andries said a prototype tested in 2017 had produced no more noise than the LEAP.

"I am very confident we will meet the most stringent noise regulations ... and safety requirements," he told Reuters.

All eyes are now on rivals led by Pratt & Whitney, which is expected to give updates on its geared turbofan later this year.

"We are committed to continued investment in evolving propulsion systems to power the next generation of commercial aircraft," Pratt & Whitney said.

Founded in 1974, CFM saw the light of day after a summit deal between U.S. President Richard Nixon and French counterpart Georges Pompidou, following attempts by the Pentagon to block it on the grounds that its engine was related to the B-1 bomber.

Under a compromise, French engineers were banned at first from looking inside the sealed casing of the original CFM core.

Although such restrictions vanished long ago, GE and Safran still maintain an unusual Chinese Wall between them over costs on the worldâs most-sold jet engines to avoid disputes.

"One of the ingredients of CFM's success is that we share the revenues; we don't share the costs. If one of us is not competitive, it doesn't reflect on the (other) partner. Everyone is fully responsible," Andries said.