Highlights of the life of Dr. Raymond Damadian: 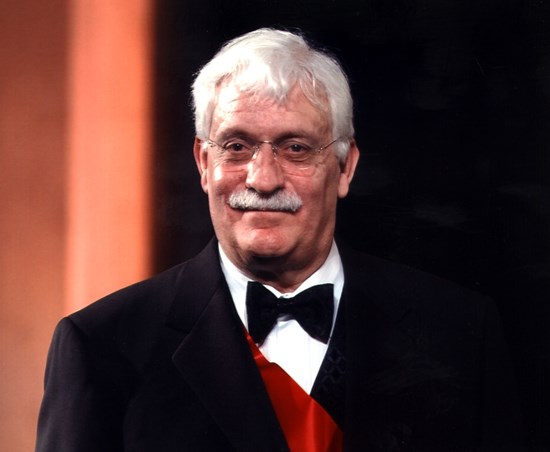 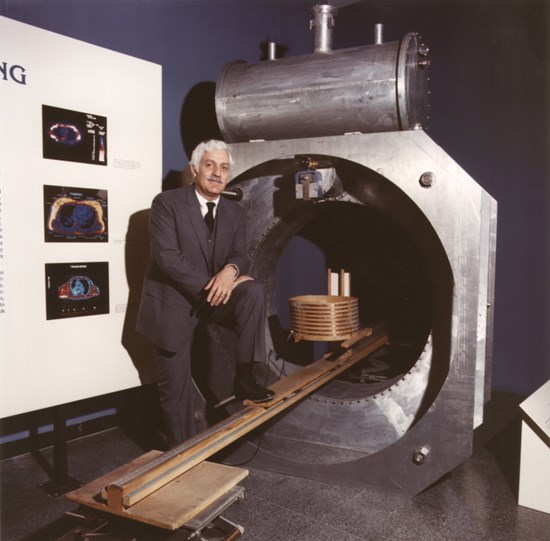 Raymond Vahan Damadian, MD with the machine he named 'Indomitable,' which made the world's first MRI scan on July 3, 1977. This picture was taken at the Smithsonian Institution Exhibit in 1986.

Mr. Damadian continued: "In his 86 years of life, Dr. Damadian accomplished more than most could dream of. He was born in March 1936 to Vahan and Odette Damadian, both Armenian-Americans. He spent his childhood in Forest Hills, New York playing with and watching over his younger sister, Claudette. He studied violin at Juilliard until winning a Ford Foundation scholarship to the University of Wisconsin at the young age of 15. After graduating college with a degree in mathematics, he went on to Albert Einstein College of Medicine and earned his medical degree. Soon after graduating from medical school, he married Donna Terry, who passed away in 2020.

"As a newly minted physician, Dr. Damadian joined the faculty at SUNY Downstate in Brooklyn. New York. It was there that he began the long and arduous journey that would ultimately lead to the invention of the MRI. While working on a research project he came across a tool used by chemists called nuclear magnetic resonance (NMR). NMR was able to detect signals from the contents of a test tube in order to help identify the contents' chemical makeup. Stunned by this tool, which scientists had been using for years, he imagined using it on a much larger scale to look inside the body instead of just a test tube. Dr. Damadian's hard work, perseverance, and unwavering faith in God transformed this figment of his imagination into the first MRI machine.

"Throughout all of the trials and tribulations he encountered while achieving this revolutionary medical breakthrough, Dr. Damadian never gave up on his dream. His persistence in the face of great adversity, especially among the scientific community, and his intense passion for trying to cure cancer led to the invention of a machine that has undoubtedly impacted and saved millions of lives. July 3, 1977 was the day he and his team achieved the world's first human MRI scan from the machine that they had named Indomitable.

"Dr. Damadian decided to take his invention and start his own business - FONAR. The company, which was incorporated in 1978, sold its first commercial MRI scanner in 1980. For over 40 years, Dr. Damadian poured his heart and soul into this company.

"Today the world mourns the loss of the Father of MRI. Dr. Damadian was a brilliant inventor, a compassionate physician, a devoted husband, a loving father, grandfather, and great-grandfather, and a trusted friend.

"While my father's guidance, experience, wisdom and day-to-day presence will be sorely missed, I am confident that the management team that had earned his trust over the last twelve years will keep FONAR profitable for years to come."

FONAR, the Inventor of MR Scanning™, located in Melville, NY, was incorporated in 1978, and is the first, oldest and most experienced MRI company in the industry. FONAR introduced the world's first commercial MRI in 1980, and went public in 1981. FONAR's signature product is the FONAR UPRIGHT® Multi-Position™ MRI (also known as the STAND-UP® MRI), the only whole-body MRI that performs Position™ Imaging (pMRI™) and scans patients in numerous weight-bearing positions, i.e. standing, sitting, in flexion and extension, as well as the conventional lie-down position. The FONAR UPRIGHT® MRI often detects patient problems that other MRI scanners cannot because they are lie-down, "weightless-only" scanners. The patient-friendly UPRIGHT® MRI has a near-zero patient claustrophobic rejection rate. As a FONAR customer states, "If the patient is claustrophobic in this scanner, they'll be claustrophobic in my parking lot." Approximately 85% of patients are scanned sitting while watching TV.

FONAR has new works-in-progress technology for visualizing and quantifying the cerebral hydraulics of the central nervous system, the flow of cerebrospinal fluid (CSF), which circulates throughout the brain and vertebral column at the rate of 32 quarts per day. This imaging and quantifying of the dynamics of this vital life-sustaining physiology of the body's neurologic system has been made possible first by FONAR's introduction of the MRI and now by this latest works-in-progress method for quantifying CSF in all the normal positions of the body, particularly in its upright flow against gravity. Patients with whiplash or other neck injuries are among those who will benefit from this new understanding.

FONAR's substantial list of patents includes recent patents for its technology enabling full weight-bearing MRI imaging of all the gravity sensitive regions of the human anatomy, especially the brain, extremities and spine. It includes its newest technology for measuring the Upright cerebral hydraulics of the cerebrospinal fluid (CSF) of the central nervous system. FONAR's UPRIGHT® Multi-Position™ MRI is the only scanner licensed under these patents.

UPRIGHT® and STAND-UP® are registered trademarks. The Inventor of MR Scanning™, CSP™, Multi-Position™, UPRIGHT RADIOLOGY™, The Proof is in the Picture™, pMRI™, CSF Videography™, and Dynamic™ are trademarks of FONAR Corporation.

This release may include forward-looking statements from the company that may or may not materialize. Additional information on factors that could potentially affect the company's financial results may be found in the company's filings with the Securities and Exchange Commission.

To view the source version of this press release, please visit https://www.newsfilecorp.com/release/133017