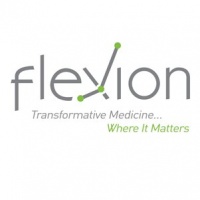 Flexion Therapeutics, Inc. (NASDAQ: FLXN) today announced the treatment of the first patient in a Phase 1b proof-of-concept trial evaluating the safety and tolerability of FX301 administered as a single-dose, popliteal fossa block (a commonly used nerve block in foot and ankle-related surgeries) in patients undergoing bunionectomy.

âThere are approximately seven million orthopedic surgical procedures performed in the United States each year, and with many of those patients using opioids after surgery, there is a substantial need for non-opioid post-operative pain management,â said Michael Clayman, M.D., President and Chief Executive Officer of Flexion. âFX301 has the potential to deliver extended pain relief while preserving motor function which we believe could provide improved patient comfort, reduce the need for opioids, allow for earlier ambulation and physical therapy, and enable patients to leave the facility or hospital sooner following surgery.â

The Phase 1b randomized, double-blind, placebo-controlled study will be conducted in two parts beginning with a single ascending dose portion which will investigate FX301 at low and high doses of funapide administered at two volumes in four cohorts of patients undergoing bunionectomy. A total of 48 patients (12 patients per cohort), will be randomized to receive either FX301 or placebo. A Safety Monitoring Committee will review data from each dose cohort before the study escalates into higher doses.

The data from the single ascending dose portion of the trial will be reviewed and a decision made regarding expanding a selected dose and volume cohort by another 36 patients. This would support broader understanding of the safety and efficacy in that cohort.

FX301 represents a potential first-in-class analgesic nerve block agent. In a validated preclinical model of post-operative pain, FX301 administered as a peripheral nerve block demonstrated analgesic effect beginning at 1 hour post-dosing compared to placebo and significantly greater analgesic effect compared to liposomal bupivacaine at 36 hours post-dosing. Data from the study also indicated that treatment with FX301 did not significantly affect total walking distance in animals at 2 and 24 hours post-injection, whereas animals treated with liposomal bupivacaine experienced a significant reduction in total walking distance at those time points. The company anticipates sharing data from the Phase 1b trial of FX301 in late 2021.

About FX301FX301 is an investigational locally administered NaV1.7 inhibitor known as funapide, formulated for extended release in a thermosensitive hydrogel. The initial development of FX301 is intended to support administration as a peripheral analgesic nerve block for control of post-operative pain. Flexion believes FX301 has the potential to provide effective pain relief for at least three to five days while preserving motor function.