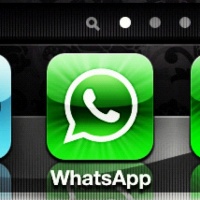 The acquisition was accomplished by the merger of Merger Sub with and into WhatsApp (the "First Merger"), and upon consummation of the First Merger, Merger Sub ceased to exist and WhatsApp became a wholly owned subsidiary of Acquirer. The surviving corporation of the First Merger then merged with and into Acquirer, which will continue to exist as a wholly owned (in part directly and in part indirectly) subsidiary of the Company. At the closing, all outstanding shares of WhatsApp capital stock and options to purchase WhatsApp capital stock were cancelled in exchange for an aggregate of 177,760,669 shares of the Company's Class A common stock and approximately $4.59 billion in cash to existing WhatsApp securityholders. A portion of the aggregate consideration is being held in escrow to secure the indemnification obligations of the WhatsApp securityholders. In addition, the Company awarded 45,941,775 restricted stock units ("RSUs") to WhatsApp employees. On the closing date, Jan Koum, WhatsApp's co-founder and CEO, became a member of the Company's Board of Directors (the "Board").

The Company issued the shares of Class A common stock described herein in reliance upon the exemptions from registration afforded by Section 4(a)(2) and Rule 506 promulgated under the Securities Act of 1933, as amended.

The foregoing summary of the Merger Agreement and the transactions contemplated thereby do not purport to be complete and are subject to, and qualified in their entirety by, the full text of the Merger Agreement, which was filed as Exhibit 2.1 to the Company's Quarterly Report on Form 10-Q for the three months ended March 31, 2014.

In connection with his continued employment as WhatsAppâs Chief Executive Officer, WhatsApp entered into an offer letter agreement with Mr. Koum (the "Offer Letter"). The Offer Letter has no specific term and constitutes at-will employment. The Offer Letter provides that Mr. Koum will receive an annual base salary of $1 and he will not be eligible for a bonus under the Companyâs bonus plan. In addition, Mr. Koum will receive an inducement grant of 24,853,468 RSUs.

The inducement RSUs will vest and settle over a four-year quarterly vesting schedule, with approximately 20% of the RSUs vesting on November 15, 2015 and, following such date, with respect to the first eight quarterly vesting dates, 1/20th of the RSUs shall vest on each quarterly vesting date, and with respect to the last four quarterly vesting dates, approximately 1/10th of the RSUs shall vest on each quarterly vesting date, subject to Mr. Koumâs continued service through each vesting date. In the event Mr. Koumâs employment is terminated by the Company or WhatsApp without cause or by Mr. Koum for good reason, he will be entitled to accelerated vesting of 100% of the unvested RSUs. The RSUs are subject to the terms and conditions of a Non-Plan Restricted Stock Unit Award Agreement (the "RSU Agreement") and Offer Letter. A copy of the Offer Letter will be filed as an exhibit to the Companyâs Quarterly Report on Form 10-Q for the three months ended September 30, 2014, and a copy of the form of notice and RSU Agreement to be used for Mr. Koumâs inducement award was filed as an exhibit to a Registration Statement on Form S-8 (File No. 333-199172) filed to register the RSUs.

In satisfaction of the disclosure required by Item 404(a) of Regulation S-K, see the disclosure under Item 2.01 of this Current Report on Form 8-K. In connection with the acquisition of WhatsApp, Mr. Koum or his affiliated entities were issued 76,357,462 shares of the Company's Class A common stock and received approximately $1.97 billion in cash, a portion of which consideration is being held in escrow to secure the indemnification obligations of the WhatsApp securityholders.