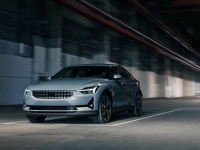 EV company Polestar Performance, a subsidiary of Zhejiang Geely of China's Volvo, announced today that they have entered into a definitive business combination agreement with SPAC Gores Guggenheim, Inc. (NASDAQ: GGPI). Upon closing of the proposed business combination, the combined company will be held by a new public company that will be named Polestar Automotive Holding UK Limited, which is expected to be listed on Nasdaq under the ticker symbol âPSNYâ.

The new company is expected to have an enterprise value of $20 billion, matching the reported valuation of Volvo, which plans to list on the Stockholm stock exchange this year. The value represents approximately three times its estimated 2023 revenue and 1.5 times its 2024 estimated revenue, according to the release.

âThis is a really exciting time for Polestar. With two award-winning cars on the road today in 14 active markets across three continents, we seek to expand to 30 markets by 2023. We are thrilled about the targeted addition of three new premium electric cars to our line-up by 2024, starting with our first SUV expected in 2022,â Thomas Ingenlath, Chief Executive Officer of Polestar, said.

Alec Gores, Chairman and Chief Executive Officer of The Gores Group and Chairman of Gores Guggenheim, states, âPolestar is a stand-out company in the EV space â a design-led, sports-performance oriented electric OEM focused on industry-leading sustainability solutions. The Company is truly differentiated from others given its premier vehicles, attractive financial profile, strong track record of performance, and the fact that it already has cars on the road across the globe. I had the privilege of seeing the line-up of upcoming models, and the cars represent best-in-class innovation and industry-leading design that set the brand apart. Driven by an incredible leadership team with Thomas at the helm, Polestar is well-positioned to capitalize on this exciting and dynamic time for car manufacturers.â

Polestar says it's on track to double its global retail locations to 100 this year and believes having 200 locations in 2022 is within reach.

"It's highly possible with the market expansion we are looking at," Polestar global sales boss Mike Whittington told Automotive News Europe in July.

Current Polestar equity holders will retain approximately 94 percent ownership in Polestar and roll 100 percent of their equity interests into the pro forma company.