A CP-KCS combination would be a positive step toward more competition â not less â in the freight rail industry with no need for regulatory solutions. In contrast, a proposed CN-KCS combination creates competitive issues and reduces options for rail customers that will require additional regulation to overcome.

Additionally, CN-KCS brings with it more challenges for existing Amtrak service on CN's lines south of Chicago that already have a history of operating issues and one of the worst on-time performance records in the industry, and challenges for the desired establishment of future passenger service in Louisiana.

In contrast, CP has consistently received an A rating from Amtrak, leading the industry for the previous five years-plus, in its annual host railroad report card recognizing its industry-leading on-time performance record. CP is also the first Class 1 railroad to complete 100 percent certification of its Amtrak schedules. CP is supportive of working with all stakeholders to introduce intercity passenger rail service between New Orleans and Baton Rouge, an outcome that comes with far more capacity and operational flexibility, and less risk to Louisiana taxpayers.

CN's own map highlights the parallel route structure of a combined CN-KCS system that would funnel all of its traffic through Chicago. CN wrongly argues that the only rail competition worth protecting is where a shipper would suffer a reduction from two to one serving railroad. Even for those shippers, CN cannot solve the problems its deal creates. The proposed divestiture solution for the Baton Rouge to New Orleans corridor fails to solve the underlying competitive problem as it touches only the last mile for certain shippers, while failing to address the reduction in competitive alternatives inherent in combining these two railroads' parallel route structures. 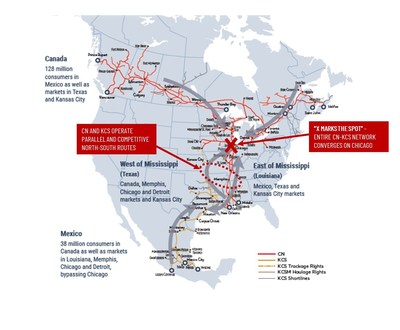 CN keeps adding promises that are no more than band-aid solutions to the competition problems CN-KCS would create. The promises keep stacking up and now include:

CP-KCS would be better for Amtrak and achieves the goals of President Biden's executive order, while CN-KCS would reinforce the problems the order is trying to solve. 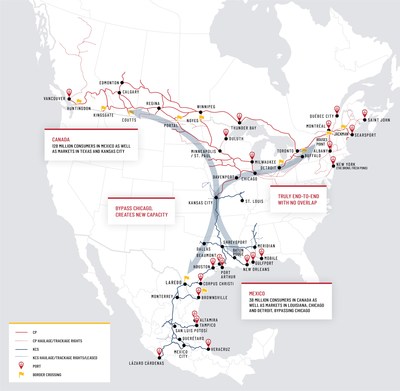 CP-KCS remains the only viable Class 1 combinationAs previously announced, CP is continuing to pursue its application process to acquire KCS so that the pro-competitive CP-KCS combination can be reviewed by the STB and implemented without undue delay, in the event KCS' agreement with CN is terminated or CN is otherwise unable to acquire control of KCS.

For more information on the benefits of a CP-KCS combination and the risks that a CN-KCS transaction would pose to the railway industry and North America, visit FutureForFreight.com.