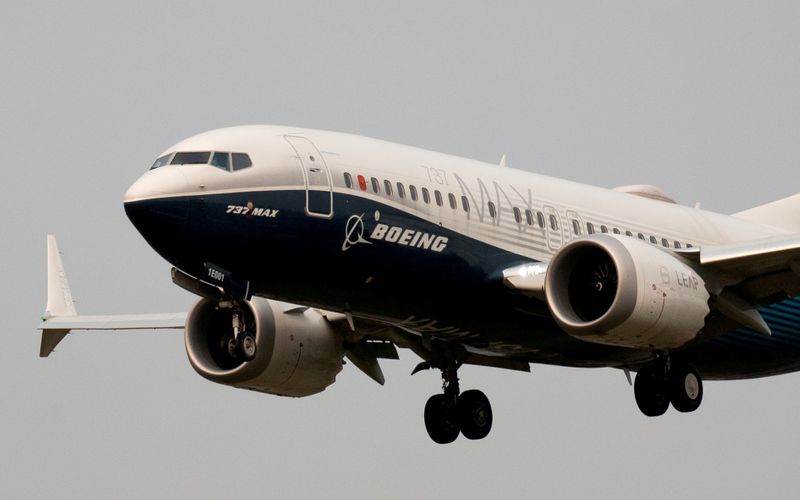 (Reuters) - Boeing delivered 26 aircraft in January, boosted by the clearing of the 737 MAX jet to fly again after a 20-month ban as it also won four new orders for its 747-8 freighters.

MAX deliveries are seen as central to Boeing's financial recovery in 2021 after a sharp slump in demand for its bigger, more profitable wide-body jets due to the coronavirus crisis added to the company's woes last year.

Boeing, which books revenue after actual deliveries, said it handed over 21 737 MAX jets last month, along with one P8 military plane and four wide-body aircraft other than the 787 Dreamliner that had no deliveries for the third straight month.

The overall figure compared to 39 aircraft in December and was double the 13 planes delivered in January of last year, as Boeing struggled with the MAX's grounding. In January two years ago, the company delivered 46 planes.

Following January's deliveries, Boeing is now estimated to have a total of about 400 737 MAX jets in storage, down from about 450 at the end of November, when the U.S. regulator gave a green light to start the jet's shipments.

The four gross orders for the 747-8 freighters from Atlas Air had already been announced.

January orders net of cancellations and conversions, however, stood at negative two, as customers scrapped two orders for 737 MAX jets, three orders for 747-8 aircraft and one order for 787-8 Dreamliner.

A business jet customer and Czech airline Smartwings canceled one order each for the 737 MAX, while three orders for 747-8 freighters were scratched by Russian carrier Volga-Dnepr and one 787-8 Dreamliner order was canceled by Jordan's Royal Jordanian, the company said.

European rival Airbus SE reported deliveries of 21 aircraft in January with no orders or cancellations.

(Reporting by Ankit Ajmera in Bengaluru; Editing by Sriraj Kalluvila)