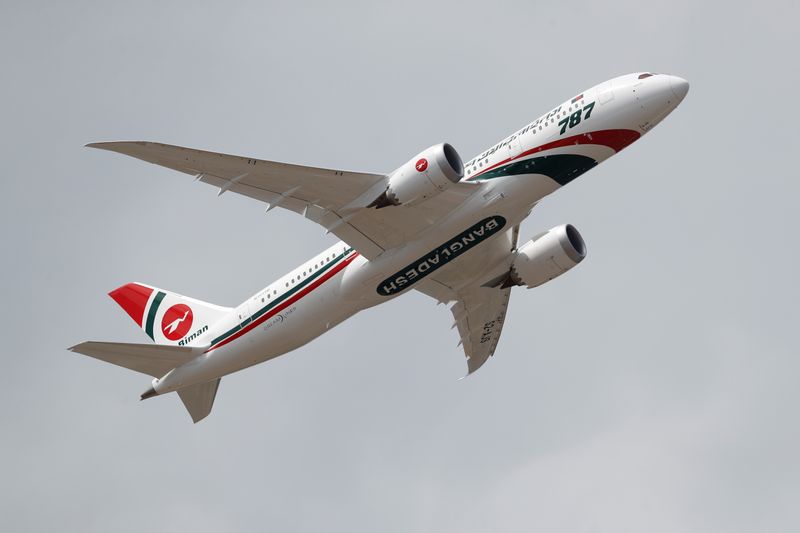 SEATTLE/WASHINGTON (Reuters) - Boeing Co will pay $6.6 million to U.S. regulators as part of a settlement over quality and safety-oversight lapses going back years, a setback that comes as Boeing wrestles with repairs to flawed 787 Dreamliner jets that could dwarf the cost of the federal penalty.

Boeing is beginning painstaking repairs and forensic inspections to fix structural integrity flaws embedded deep inside at least 88 parked 787s built over the last year or so, a third industry source said.

The inspections and retrofits could take up to a month per plane and are likely to cost hundreds of millions - if not billions - of dollars, though it depends on the number of planes and defects involved, the person said.

Boeing shares extended losses in the final hour of trading, closing down 5.6%, after Reuters first reported the settlement with the Federal Aviation Administration over the planemaker's failure to comply with a 2015 safety agreement.

The penalties include $5.4 million for not complying with the agreement in which Boeing pledged to change its internal processes to improve and prioritize regulatory compliance and $1.21 million to settle two pending FAA enforcement cases.

The planemaker is strengthening processes and operations "to ensure we hold ourselves accountable to the highest standards of safety and quality," a spokesman said by email, adding that settlement "fairly resolves previously-announced civil penalty actions while accounting for ongoing safety, quality and compliance process improvements."

Boeing engineers are working to determine the scope of inspections, including whether jets can be used as-is without a threat to safety, two people said. Boeing has not told airlines how many jets are impacted, another person said.

The FAA has been investigating instances of oversight lapses, debris left inside finished aircraft, and managers putting pressure on employees handling safety checks for the FAA, people familiar with the proceedings said.

The FAA has also wrapped into a single investigation three separate 787 defects arising over the last year that have triggered the invasive inspections, the people said.

Boeing told the FAA in August 2020 about the latest flaw, involving structural wrinkling in the interior fuselage skin where carbon-composite barrels that form the plane's lightweight body are melded together.

The defect went unnoticed for months or longer because computerized safeguards that crunch data looking for quality flaws had not been programmed to look for the gaps, a third industry source said.

The 787 production problems have halted deliveries of the jet since the end of October, locking up a source of desperately needed cash for Boeing.

The fuel-efficient 787 has been a huge success with airlines, which have ordered 1,882 of the advanced twin-aisle jet worth nearly $150 billion (74.7 billion pounds) at list prices.

But the advanced production process and sprawling global supply chain caused problems over the years.

As of February, Boeing had fixed the 787 production process causing the wrinkling defect, according to two people familiar with the matter.

However, planes rolled off the assembly line with the flaw for more than a year, at least, continuing even after the flaw was discovered in August 2020.

"It's difficult to see a definitive fix that is agreeable by the aviation authorities and all going forward," Boeing customer Air Lease Corp's CEO John Plueger told analysts on an earnings call Feb 22. "I don't think that we're there yet."

Boeing has been working on the three potentially-hazardous defects as it charted plans to consolidate final 787 assembly in South Carolina starting next month, at a sharply-reduced rate of 5 787s per month.

One senior supply chain source said they will have to cut rate again, but another person close to the company said there was no discussion of an imminent cut.

Boeing said last month it expects to resume handing over a small number of 787s to customers later this quarter.

It has an ambitious internal plan to deliver 100 of the jets this year, one person said. Analysts say deliveries are not expected to recover to 2019 levels until at least 2024.

But before any jet is delivered, it must go through invasive inspections and costly repairs.

First, technicians must pull out the passenger seats, open up the floor paneling and use specialty tools to measure whether defects invisible to the naked eye are present, according to three people with direct knowledge of the process.

The repair work - already underway at Boeing factories in Everett, Washington and North Charleston, South Carolina - is even harder.

In the bowels of the jet, technicians have to remove multiple specialty fasteners on both sides of the inner fuselage skin, then install newly produced "shims" that fill out gaps and remove the structural dimpling. Workers then replace all the fasteners, re-paint, and re-install the interior, they said.

"It's like open-heart surgery," one of the people said. "They'll be retrofitting the fleet for potentially several years."