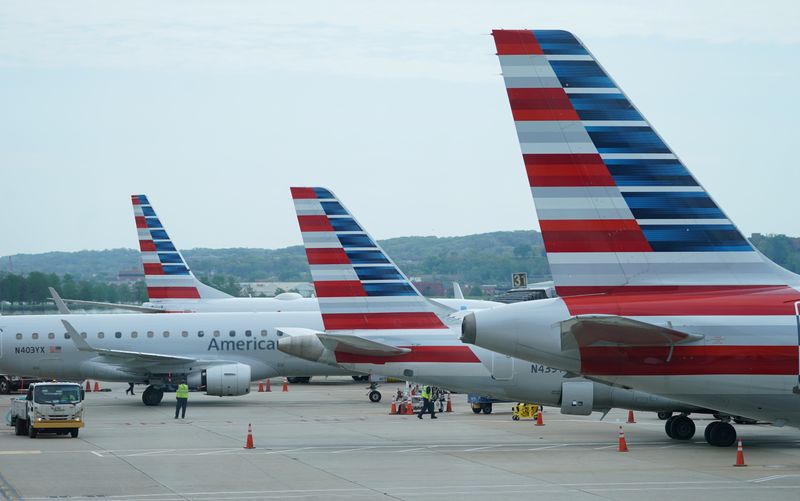 FILE PHOTO: American Airlines jets made by Embraer and other manufacturers sit at gates at Washington's Reagan National Airport amid the coronavirus pandemic, in Washington, U.S. April 29, 2020. REUTERS/Kevin Lamarque/File Photo

(Reuters) - American Airlines said on Wednesday that some 13,000 employees are at risk of furlough when a U.S. aid package for airline workers expires on April 1, blaming slow vaccine rollouts and new international travel restrictions for dampening demand.

"We are nearly five weeks into 2021, and unfortunately, we find ourselves in a situation similar to much of 2020," Chief Executive Doug Parker and President Robert Isom said in a memo to employees which was also included in a regulatory filing.

Fort Worth, Texas-based American furloughed 19,000 workers when a previous round of government payroll support ended on Oct. 1 but recalled them in December after a fresh $15 billion for the industry through March.

Aviation unions are already pushing for another $15 billion in U.S. payroll assistance to protect jobs through the summer.

"The vaccine is not being distributed as quickly as any of us believed, and new restrictions on international travel that require customers to have a negative COVID-19 test have dampened demand," American said, adding that the company will not fly all of its aircraft this summer as planned.

American said it was launching a fresh round of exit packages in an effort to mitigate potential involuntary furloughs, similar to plans by United.

They are required by law to inform employees whose jobs are at risk, generally within 60 days.

The Allied Pilots Association, which represents American's pilots, said actions by management and their treatment of the airline's balance sheet "have placed American in a more precarious situation than our competitors."

American is the most leveraged of the major U.S. carriers. Last week it took advantage of a sharp rise in shares after a mention on Reddit's WallStreetBets forum to launch a fresh $1 billion stock sale to boost liquidity.

(Reporting by Tracy Rucinski in Florida; Editing by Matthew Lewis)