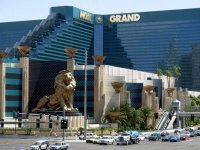 MGM Resorts (NYSE: MGM) is getting upgraded to Outperform from Mkt Perform at Bernstein this morning. The analyst, Janet Brashear is slapping a $17 price target on the name (prev. $15), representing 35% upside.

Here are some of the details:

MGM is becoming a serious player in Macau. For the past two quarters, MGM has had a 10-11% share of the gross gaming revenue (GGR) in Macau versus a prior share of 7-8%. With six months at this level, we are using this market share as the basis for future projections. While share will come down somewhat as Galaxy and LVS open new properties, we assume it is off this new, higher base.

Macau makes all the difference. MGM's Achilles heel strategically has always been its lack of market diversification with Las Vegas accounting for 80% of EBITDA. The recent IPO of MGM China Holdings was an important inflection point. MGM's share of this venture increased 1% to 51%, which has more value from a control standpoint than an earnings standpoint. But, there has been a big change in earnings as well based on MGM improving its market share by about 300 bps and the upward revisions in market growth estimates to around 35% y/y. Macau is growing from an inconsequential share of overall growth to a significant component of earnings. This growing component of earnings deserves a higher multiple as well. MGM China Holdings first began trading at around 13x EV/EBITDA based on market estimates, an attractive premium to the ~10x rating MGM gets in the U.S.

It is time to take MGM seriously in Macau. Projecting off the past performance of MGM Macau can lead to an underestimation of this casino's future potential. The casino is roughly the size of its neighbor on the peninsula, Wynn Macau, but it has never produced Wynn-style results. In 2008, MGM produced onefourth the EBITDA of Wynn. In 2009, that grew to 30%. In 2010, it grew again to 40%. This year we project MGM EBITDA will be 53% of our Wynn projection. The point is not that MGM can or will surpass Wynnâjust that it has finally improved to the point of being a very viable competitor with substantially enhanced bottom-line prospects.

The Macau market is STILL growing. We have increased our market projections in Macau to 35% for this year and 17-19% in subsequent years. This growth rate compares favorably to Las Vegas and, along with the incremental market share, raises MGM Macau's contribution to over 20% of total EBITDA in 2014, from only 2% in 2008.

Las Vegas is no longer the only lynchpin. We believe many investors are waiting for signs of a Las Vegas recovery to reassess MGM's stock. Our model assumes some improvement in Las Vegas but is well shy of a full recovery, even in 2014. The Macau portion of the model, given the seismic improvements, is a bigger driver for MGM right now.

Valuation is very attractive at current levels, even considering the risk profile. MGM is a risky stock with a net debt-to-EBITDA ratio approaching 11x. While much of this debt is long-dated, averting some near-term risks, the company is very sensitive to economic changes (here or in China) and may be prone to equity dilution. That being said, the stock is currently trading at 11x 2012 EV/EBITDA which seems cheap relative to its future prospects which encompass the new importance of Macau.

Notablecalls: I think MGM is worth keeping on the radar today for couple of reasons:

- First, it's a bounce play after the $3/share haircut in the past 2 weeks.

- Second, as Bernstein highlights MGM has been gaining market share in Macau. That's a good thing. The stock has tended to move up in times it has gained mkt share in Macau, so today there seems to be a bit of a disconnect there.

But mainly, it's a bounce play for today. I'm guessing $13+. Avoid overpaying early on and wait for a possible pull-back at open.