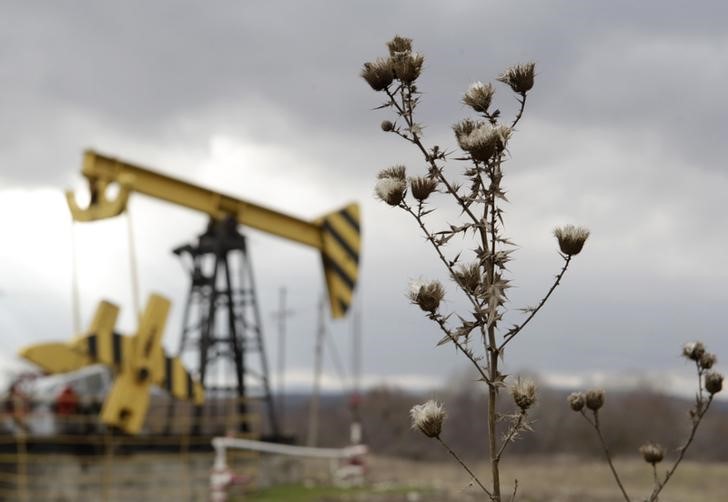 Plants are pictured near an oil pump, owned by oil company Rosneft, in the settlement of Akhtyrskaya in Krasnodar region, southern Russia, December 21, 2014. REUTERS/Eduard Korniyenko

(Reuters) - The plunging price of crude oil is causing pain at every kind of U.S. mutual fund this year, humbling even the industry's best portfolio managers as their mistimed bets in the energy sector continue to cause losses for investors.

The sector's bottom has been more of a trap door for many fund managers. On Tuesday, for example, U.S. crude futures

The oil price recovery that many predicted for 2015 is now being forecast for 2016, though investment bank Goldman Sachs has said prices could drop as low as $20 a barrel.

Last week, a policy meeting at the Organization of the Petroleum Exporting Countries resulted in no decision to cut output, fanning fears of a growing global crude oil glut.

The $11 billion Energy Select Sector SPDR ETF (NYSE: XLE), used by mutual funds and hedge funds alike, is off 10 percent in the past month.

Even when fund managers point to optimistic signs in the oil market their message sounds somewhat pessimistic.

Dowd's total return this year is minus 17.77 percent, but that's better than most of his energy fund peers who average a nearly 20 percent negative return.

Bond giant Pimco is adding energy-related securities to some of its portfolios as the Newport Beach, Calif- firm expects an increase in oil prices over the next 12 months, Dan Ivascyn, group chief investment officer, said in an interview on Tuesday.

"We are becoming constructive in this sector because we expect oil higher in price over the next 12 months or so," Ivascyn added

Earlier this year, RiverFront Investment Group LLC sold off positions tied to pipelines and other companies it felt were dependent on higher-priced oil.

But the firm, which specializes in picking exchange-traded funds, kept the Market Vectors Oil Services ETF (NYSE: OIH), which has fallen 10 percent over the past week, as of afternoon trading on Tuesday. That ETF is the sixth-largest holding in the RiverFront Moderate Growth & Income Fund

Michael Jones, chief investment officer at RiverFront, said companies in the oil-services sector have already priced in "an unbelievably distressed market" and he doesn't expect prices to move lower. He said oil declines over the last week will help the company's stock ETF positions in Japan and Europe, regions that can profit from low oil prices.

"We think we're going to be OK," said Jones. "We're in the best house in a bad neighborhood."

Overall, U.S. mutual funds have slashed their exposure to the energy sector by nearly 40 percent over the past three years, according to Lipper Inc. The average allocation has dropped to 5.11 percent from 8.36 percent among those funds with an energy allocation during that three-year span.

Despite that reduced exposure, oil-price pain is easy to find.

A number of funds, for example, have bet on a recovery at Chesapeake Energy Corp (NYSE: CHK), only to see the natural gas producer's stock drop even more. Among the many managers burned by that bet is Bill Nygren who runs the $6 billion Oakmark Select Fund

Nygren, considered a top stock picker in the mutual fund industry, increased his share count in Chesapeake by nearly 40 percent to 25.7 million shares during the six-month period that ended Sept. 30. Since then, Chesapeake's stock has dropped about 41 percent.

Chesapeake is a big reason why Nygren's fund has a total return of minus 2.48 percent this year, lagging 86 percent of peers, according to Morningstar Inc. He was not available for comment.

Kathleen Gaffney, who runs the $1 billion Eaton Vance Bond Fund, said she's betting on Chesapeake debt, 1 percent of the fund's assets, because the company has valuable assets and enough liquidity to make it through this turbulent cycle in the energy market.

But she has noticed the dramatic pricing gaps among junk-rated energy bonds, reminiscent of the 2008 financial crisis.

Energy junk bond spreads surged Monday by the most in 3-1/2 months and to their widest since March 2009 at 1169 basis points, according to BAML fixed income indexes. It made for a total return on the day of negative 1.63 percent.

That is a dramatic move in the world of bonds, as the magnitude of the move is more than 5 standard deviations from the norm and the index has seen only four worse days than yesterday since the height of the credit crisis.

"It's not a vicious unwind like 2008," Gaffney said. "It's the shock of the price moves that reminds me of that time."