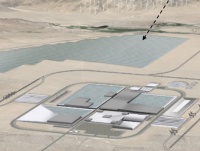 Global Equities Securities analyst Trip Chowdhry was out with an extensive report on Tesla Motors (NASDAQ: TSLA) after evaluating the value of the company's GigaFactory. Chowdhry believes Tesla's GigaFactory may be worth $50 billion, which is more than double the current market cap of the entire company.

While some might believe Chowdhry is "drinking its own Kool-Aid", the analyst said not so fast and said this scenario has played out many times before, explaining that GigaFactory is a new Industry Creation activity.

He highlighted the following examples:

Global Equities Securities issued an lengthy report entitled "Introduction to Battery Technology," to support its Tesla GigaFactory thesis. The firm maintained an Overweight rating and price target of $385 on Tesla. Below is the executive summary and table of contents:

Italian physicist Count Alessandro Volta first discovered this process in 1799 when he created a simple battery from metal plates and brine-soaked cardboard or paper. Since then, scientists have greatly improved upon Volta's original design to create batteries made from a variety of materials that come in a multitude of sizes and kinds

Primary (single-use or "disposable") batteries are used once and discarded; the electrode materials are irreversibly changed during discharge. Common examples are the alkaline battery used for flashlights and a multitude of portable devices.

Secondary (rechargeable batteries) can be discharged and recharged multiple times; the original composition of the electrodes can be restored by reverse current. Examples include the lead-acid batteries used in vehicles and lithium ion batteries used for portable electronics

Tesla primarily uses small size Lithium-Ion batteries for its cars, which provide them with a good range, and with a good balance of Power Density, Energy Density and Specific Gravity. Tesla is currently working on its $5 billion worth Gigafactory which would produce lithium ions for the upcoming Tesla cars. Tesla has also been granted a patent on Metal Air batteries