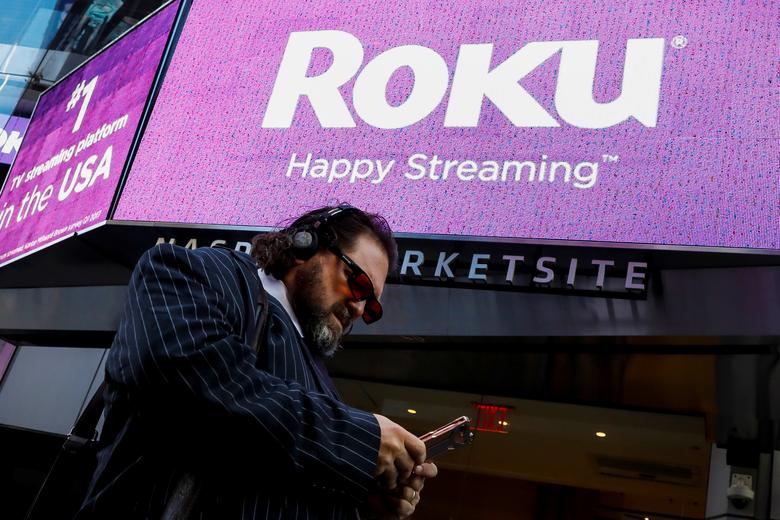 Shares of Roku (NASDAQ: ROKU) have surged over 8.5% in pre-market trading Friday after the streaming company smashed analystsâ expectations for Q1 profit.

That compares to analystsâ estimates of GAAP loss of 13 cents a share on sales of $492 million. The number of active accounts in the first quarter rose by 2.4 million to 53.6 million, while the number of hours consumers spend on the platform climbed to 18.3 billion quarter-over-quarter.

Roku issued an upbeat outlook for the second quarter, expecting revenue to land in a range of $610 million to $620 million.

âRoku delivered an exceptional first quarter led by strong growth in advertising and the expansion of content distribution partnerships. We generated record revenue and gross profit growth, as well as record Adjusted EBITDA. More broadly, the overall secular shift to streaming continues, and Roku benefits as a result of our leading technology and scale,â the company said in a statement.

The strong Q1 results prompted Loop Capital analyst Alan Gould to upgrade the stock to âBuyâ from âHoldâ with a price target of $450.00 per share as he notes that âfundamentals are stronger than we had anticipated.â

âRoku reported its strongest quarter since going public with a 79% sales gain to $574 million, 17% ahead of consensus estimates, driven by a slightly more than doubling of platform revenue. The quarter benefited from unusually strong ad demand by the entertainment studiosâ new SVOD platforms, some positive 606 accounting impact and easier comps at the end of the quarter. While sales growth will moderate in the second half of the year, the company should report another year of 50%+ sales growth. The stock has declined with a number of the hyper-growth stocks this year,â Gould wrote in a note sent to clients.

âROKU blew away its y/y 1Q21 rev guidance, reporting 79% y/y rev growth, its highest growth rate ever since going public, despite 3x higher revs than at IPO. Value capture is maximized inside digital "Walled Gardens" like ROKU owing to data superiority and at 54mm homes, Roku has the most CTV data points for brand advertisers and the broadest US audience reach for SVOD competitors, we believe,â Martin said in a note on the Buy-rated Roku.

KeyBanc analyst Justin Patterson sees a buying opportunity in Roku âafter the recent correction as the growth profile remains one of most robust in the Internet sector.âHowever, the analyst lowered the price target to $460.00 per share from $518.00.

â1Q results and guidance reinforce our view that: 1) Platform revenue is inflecting; 2) share gains against linear TV are helping ROKU overcome difficult comps; and 3) Street gross profit estimates are too low for 2021/2022E (our above consensus estimates increase by 10% each year),â Patterson wrote in a memo sent to clients.