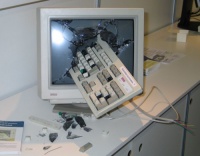 PC shipments fell 14 percent in Q1, the worst decline on record, according to reports from researchers at IDC. Analysis showed buyers opted to splurge on tablets and smartphones, leaving PCs to collect dust. Researchers had forecast a decline of only 7.7 percent.

"We don't have a lot of reason to be optimistic that the market will remain in more than replacement-cycle mode," researcher Jay Chou said. "Consumers have found Windows 8’s redesigned user interface disorienting, and prices for touch-screen enabled computers that run the software are still too high."