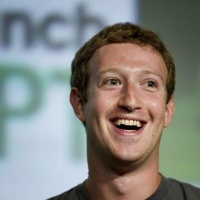 Facebook (NASDAQ: FB) shares are seeing their largest one day gain Wednesday after Zuckerberg & Co. delivered on Q3 numbers and showed significant progress in mobile monitization. After digesting the numbers and participating on the conference call, analysts from around Wall Street have weighed in. This is what they are saying:

Goldman Sachs Heather Bellini - "With 3Q12 mobile sales growth estimated at 600% qoq to $153mn, we believe fears over FBâs ability to profit from mobile will subside... As fears over the lockup subside, we believe the market will focus on fundamentals and Ad growth, which we expect will accelerate in CY13, as
such, we continue to rate the shares Buy." Maintain Buy rating, cut target from $37 to $35.

Jefferies Brian Pitz - "It was a nice 3Q as Facebook revenue and EPS both edged expectations despite an FX headwind to the tune of about ~$60MM. Overall we see a continuation of similar trends as seen in 2Q, marked by the continued user shift to mobile and weakness in the Payments & Other revenue line. Of the ~12 new (early stage) monetization levers we track at FB, only Sponsored Stories likely had a meaningful impact in 3Q." Maintain Buy, $30 price target.

Needham & Company Laura Martin - "70% of FB's EPS call content was centered on mobile. FB began monetizing mobile in March and generated 14% of its 3Q12 advertising revenue from mobile, or $150mm in the 90 days ended Sept 30, 2012. Mark Zuckerberg said that he believes mobile revenue will be larger than desktop over time, because more people use mobile devices to access FB and mobile users spend more time per day on FB." Maintain Buy, $25 price target.

Wedbush Michael Pachter - In Q3, mobile MAUs reached 604 million, up 61% year-over-year, or 60% of total MAUs. Mobile users are more active than their desktop user peers, with mobile users roughly 30% more likely to use Facebook on a given day. In Q3, 14% of ad revenue was from mobile, representing $150 million. We estimate that 20% of overall usage is mobile... Our price target reflects a value of $60 per MAU at Facebook's peak MAU level with a conservative monetization assumption of $1 per MAU per month for five years." Maintains Outperform, $35 price target.

Pivotal Research Brian Wieser - "...significant expansion in our expectations of the company's potential revenue base from mobile advertising, offset partially by a decline in our expectations for payments revenues." Maintain Buy, raises price target from $28 to $30.

Oppenheimer Jason Helfstein - "FB shares increased 13% after reporting stronger than expected 3Q results, reflecting the success of the company's new mobile ad products. As a result, this should ease investor fears around estimates, with pending lock-ups as the remaining concern. Third-quarter revenues increased 38% y/y (ex. FX) vs. 2Q's 36%, 3% ahead of the Street and 7% above our estimate. EBITDA was 8% and 23% above, respectively. Mobile was 14% of revenues vs. 2-3% in 2Q. Given the large increase in mobile monetization, we now see 2013 Street estimates as achievable." Maintains Outperform rating, $27 price target.

Nomura Brian Nowak "FB reported 3Q:12 revenue of $1.26bn, 3% above us and the Street, driven entirely by faster-than-expected ad growth. Total ad revenue of $1.09bn came in 5% ahead of us, as FBâs ad business showed the acceleration investors have been seeking. Like GOOG, the shift toward mobile was front and center, as 14% of FBâs 3Q ad revenue came from mobile, up from 0% in February when FB initially started testing mobile sponsored stories. FB is an evolving, innovation-driven story, and we are encouraged by the fact that its 3Q ad acceleration was largely a product of this innovation. We like FB as a call option on stronger, long-term monetization. 2012E/2013E Non-GAAP EPS from $0.47/$0.49 to $0.53/$0.54" Maintain Buy, $27 price target.

Topeka Capital Victor Anthony - "Investors were looking for a show me the mobile advertising monetization quarter, and Facebook delivered just that, but in a meaningful way, with mobile ads now representing 14% of total advertising revenues. This led to an acceleration in advertising revenue growth several quarters ahead of when we had anticipated, and validating a part of our long-term positive view on the stock, that is, mobile monetization would be a significant contributor to financials. With mobile monetization now a sustainable reality in our view, other monetization methods including FBX, e-commerce, and search hold significant promise that could further propel topline growth and sustain margins over the next two years." Maintain Buy, $34 price target.

Deutsche Bank Lloyd Walmsley - "Facebook reported revenue 3% above consensus and EPS also beat by $0.01. Ad revenue is re-accelerating on the back of Sponsored Stories in Newsfeed, which was around $200m in 3Q12 (up from $30m estimated in 2Q12) and with $150m coming from mobile ads. The exit run rate for SS-in-NF was âover $4mâ suggesting as much as $500m-$600m in 4Q, but are likely cannibalizing right-rail ads. While we are excited about the ad acceleration, we are largely maintaining our 2013 estimates on higher ads but lower payments revenue. Our optimism is weighed down valuation, as shares trade at 34x 2014 EPS vs. online advertising peers at 15x." Maintain Hold, ups price target from $22 to $24.

Wells Fargo Jason Maynard "FB reported Q3 results ahead of consensus on an improvement in ad revenue growth. Ad sales grew 43% on a constant currency basis reflecting early mobile monetization, better pricing, strong engagement and increased usage. We think the ad revenue reacceleration should turn the sentiment tide slightly more positive. In our view, the stock has seen its lows and should be able to withstand the coming share lockups. FB said mobile revenue accounted for 14% of advertising revenue, or over $176MM in the quarter. FB said that sponsored stories has a run rate of $3MM/day with 75% of that coming from mobile. This puts mobile revenue on pace to exceed $1B in revenue in short order. Total revenue was $1.26B (+32% yr/yr), operating margin was 42%, with $0.12 EPS. ARPU was $1.25 and advertising ARPU was $1.04. It is very clear to us that the transition to mobile computing is happening quickly and progress on the ad front is emerging. With significant potential for increased social advertising we are confident that improved monetization is a "when" not "if" issue. While sentiment has clearly been sour, we believe there is still great potential for ARPU improvement and eventual share appreciation. We are increasing 2012E/2013E EPS to $0.50/$0.59 from $0.49/$0.57. We also trim our valuation range to $30-32 from $37-40 reflecting a lower multiple." Maintain Outperform, valuation range to $30-$32 from $37-$40.