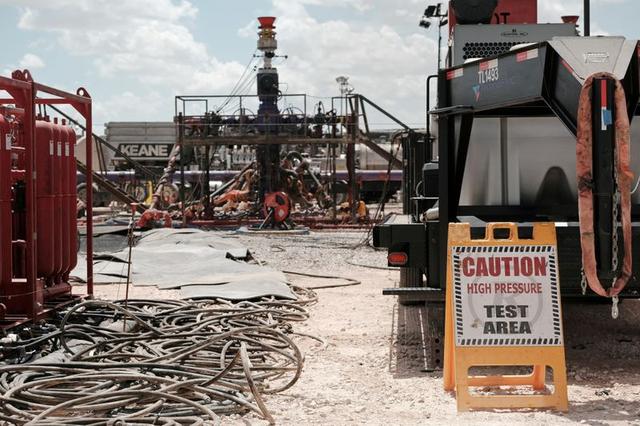 Morgan Stanley analyst Devin McDermott believes the latest decision from the US Interior Department to put new oil and gas lease sales and permits on federal lands and waters on hold for 60 days signals a more restrictive policy backdrop and possible 'Frac Ban' ahead.

The order effectively bans drilling on federal land and it represents a more aggressive divergence from President Biden's messaging prior to the election. According to Harrison, about 25% of US oil production is tied to federal lands and waters.

âWithin this, higher decline, shale production comprises ~40%, and the remainder consists of conventional production in the Gulf of Mexico and Alaska. Among the shale plays, the majority of federal production is located in the Permian and Bakken. While the frac ban would not impact currently producing wells, it would impact new wells that offset natural declines in current production. Currently, just 14% of active land rigs are on federal land, 73% of which resides in the New Mexico portion of the Permian basin â which has the highest proportion of undeveloped acreage on federal land,â McDermott said in todayâs note.

âIf the permitting moratorium becomes permanent, there is a scenario where drilling on federal land could cease after current permits expire. For companies with diversified operations, we would expect much, if not all, of planned capital on federal land would be reallocated towards oil & gas development on non-federal land.â

Going forward, the analyst expects the permit portion of the ban to be lifted as he remains overall constructive on Energy and explore implications across subsectors.

In general, the largest players with diversified portfolios have less exposure to this ban while those with smaller operations are facing higher risk.

âUpstream equities with among the most exposure to federal land (EOG, DVN, MUR, COP & XEC) declined an average of 9% following yesterday's posting of the DOI's order. However, even under the most bearish scenario â no value for federal acreage beyond an assumed 2-year permit runway â we still see upside to valuations for COP (OW), XEC (OW), DVN (OW) and MUR (EW), suggesting 'frac ban' risks are mispriced.

âRelative to our expectation for a generally more restrictive regulatory backdrop, shale operators with scale, such as FANG (OW & no federal land exposure), and globally diversified companies, including HES (OW) and APA (EW), are more advantaged over smaller shale pure plays â within our coverage, CPE (EW) & CLR (UW),â the analyst adds.

Exxon (NYSE: XOM) and Chevron (NYSE: CVX), in particular, look more resilient relative to both drilling restrictions and more broad policy implications of the Biden administration. For instance, Bidenâs tight stance on the supply/demand for oil and gas may help these two energy giants going forward.