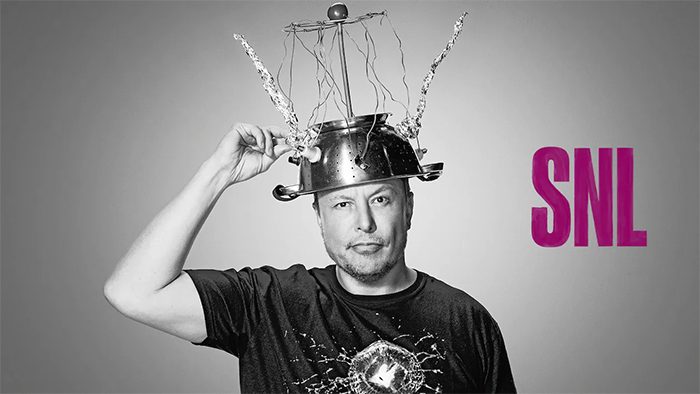 Lucid Motors (NYSE: CCIV), Ford (NYSE: F), Volkswagen (OTC: VWAGY), and Volvo (OTC: VLVLY) all showcased their EVs during the show as they look to close the gap to the market leader Tesla.

Lucid advertised its Lucid Air, a luxury vehicle with a battery range of more than 500 miles. Similarly, Ford showed the Mustang Mach-E ad, Volkswagen decided to present its first electric SUV VW ID.4, while Sweden-based Volvo presented its hybrid SUV XC-90. While Musk hasnât commented on any of these carmakers, he did make a reference to Toyota.

"I could say something truly shocking, like I drive a Prius," Musk joked.

The fact that as many as 4 carmakers showed their new EVs during SNL, for Wedbush analyst Dan Ives shows that the EV arms race is in âfull force.â

âIn this green tidal wave for EVs, competition is all chasing after leader Tesla (which does not advertise) going after this $5 trillion EV market over the next decade as consumer demand is skyrocketing globally with only 3% of autos sold today EV and poised to hit 10% by 2025,â Ives wrote in a note sent to clients.

Tesla, in particular, has witnessed robust demand for its products lately, in China especially.

âBased on the current trajectory and factoring in the chip shortage, Tesla appears off to a strong start in 2Q and should be able to comfortably exceed 200k units delivered in the quarter although chip shortages and production issues will be front and center over the coming months. We also believe as the China EV delivery numbers come out over the coming weeks that April and May demand look strong not just for Tesla, but domestic EV players,â the analyst adds.

China remains front and center for Tesla bulls (and bears), Ives reiterates, as the EV ecosystem is just starting to play out globally.

âWith China a linchpin to Tesla's global success and its Giga footprint a key advantage, the latest back and forth between Beijing and Tesla have been a PR black eye with safety issues in the country a hot button issue. Now its about Musk playing nice in the sandbox which appears to be happening over the last few weeks around safety issues and making sure that Tesla does not see any stumbles/government crackdown in China which is poised to represent 40%+ of global deliveries by 2022.â

Ives has an âOutperformâ rating and a $1,000 per share price target on TSLA.