VANCOUVER, BC / ACCESSWIRE / January 14, 2022 / Sassy Resources Corporation ("Sassy" or the "Company") (CSE:SASY)(FSE:4E7)(OTCQB: SSYRF) is pleased to announce the discovery of multi-kilometer-long gold and copper-in-soil anomalies associated with a significant fold structure located in the southwest section of the 949 sq. km Mt. Peyton Project. The newly-named "Golden Horseshoe" target has never been previously drilled or systematically explored and is interpreted to have a potential strike length of at least 20 km.

Mr. Ian Fraser, PGeo, Sassy VP Exploration, remarked, "We've opened up a very broad new area for potential new high-grade gold discoveries in the heart of the under-explored Central Newfoundland Gold Belt. Extensive soil work, never previously carried out at Mt. Peyton, has returned significant anomalies, especially considering the generally thicker tills at Mt. Peyton vs. our other early-stage discovery at Gander North. These soil anomalies at the Golden Horseshoe target closely correlate with very distinctive magnetic features. We will tighten up the grids as we vector toward a mineralizing source.

Mr. Fraser added, "The large egg-shaped Mt. Peyton Property is made up of a granite intrusive surrounded by gabbro. It is conceivable given the location of the Mt. Peyton Property relative to recent gold discoveries within the Gander Gold Belt that the granite intrusive is a possible heat engine which provided an impetus for gold to mobilize in deep-rooted, favourable structures."

The Mt. Peyton Property is located between the Gander Gold Belt to the East, which hosts significant recent and ongoing gold discoveries by New Found Gold, Labrador Gold and others, and the Valentine Lake Shear Zone and associated structures to the west, which host the large Marathon Gold deposit and developing discoveries by Sokoman Minerals and others.

"The Mt. Peyton Project was staked based on two key fundamental principles for gold exploration on the island: 1) Gabbros are very important - they are a highly favorable brittle reactive host rock; and (2) Regional structures are also key, and the regional magnetic lineaments we're so excited about at Mt. Peyton confirm that these structures are present.

"The first pass soil program directly targeted the regional magnetic low lineaments running through the Mt. Peyton gabbro. Soil lines were placed at 90 degrees to the regional structure patterns and sampled at 25-meter station spacing on 500-meter line spacing. The program was designed to see which structures might light up.

"The results are better than expected or at least what we had hoped to find in our first pass work. The southern structure outlined the longest most continuous trend with three separated grids, each 2.5 km long that sporadically covered 16 km of a 20 km magnetic low structure with all three grids indicating anomalous gold values from line to line. This is exactly what Sassy was looking for, a kilometer scale anomalous structure that can quickly be followed up with more detailed soils that will lead us directly to drill targets later this year.

"I look forward to a comprehensive structural interpretation of the Mt. Peyton setting and this next phase of work at the Golden Horseshoe target as this is when new discoveries are made." 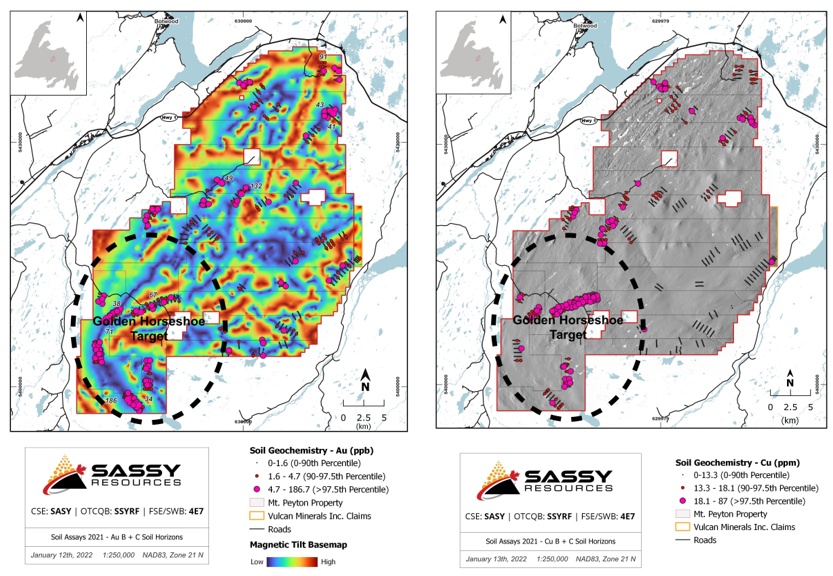 Sassy Resources Gold Corporation contracted the services of GroundTruth Exploration to conduct soil geochemistry programs on all of Sassy's properties in Newfoundland. The preferred and targeted soil horizon for sampling is the C-horizon for all programs. Glaciation and till deposition are variable throughout the province of Newfoundland. This variation has a direct effect on the "local" depth to the C-horizon. GroundTruth crews utilize a Eijklcamp hand auger which is capable of collecting a soil sample to a maximum depth of 110cm. If the C-horizon soil is beyond the depth the auger can achieve, GroundTruth crews collected a sample from the B-horizon and noted this in the metadata collected at that particular sample site. At Mt. Peyton, the current assay database consists of 4,119 C-horizon soil samples and 1,671 B-horizon soil samples. As stated, the results reported in this News Release are comprised of the combined C and B-horizons. The Company's final interpretation of all Mt. Peyton soil results will distinguish and interpret the C and B-horizons individually and the merged C and B-horizons.

For all Sassy programs, soil samples are collected at pre-determined sample locations, placed in soil sample bags and all metadata associated with a sample is recorded. Once sorted and logged, samples are shipped to Eastern Analytical in Springdale, Newfoundland for sample preparation. At Eastern Analytical individual samples are dried and sieved and 15g splits are prepared and then shipped by courier to Bureau Veritas Commodities Canada Ltd. (Bureau Veritas) in Vancouver British Columbia for analyses. Eastern Analytical and Bureau Veritas are ISO / IEC 17025 certified laboratories and independent of Sassy Resources Corporation and Gander Gold Corporation. At Bureau Veritas the 15g splits are partially digested by aqua regia digestion and analysed for gold plus 36 additional elements by ICP-ES/MS (method AQ201). GroundTruth Exploration crews took a field duplicate every 25 th sample and these field duplicates were inserted into the sample stream to monitor the quality of analyses for the soil sampling program. In addition to field duplicates, standards and a blank material was systematically inserted into the sampling stream for QAQC purposes.

Visit SassyResources.com and sign up for news alerts to stay informed as exploration continues year-round.

The technical information in this news release has been reviewed and approved by Mr. Ian Fraser, P.Geo., Vice President of Exploration for Sassy Resources. Mr. Fraser is the Qualified Person responsible for the scientific and technical information contained herein under National Instrument 43-101 standards.

Sassy Resources is an exploration stage resource company currently engaged in the identification, acquisition and exploration of high-grade precious metal, base metal and uranium projects in North America. Its focus is the Foremore Project located in the Eskay Camp, Liard Mining Division, in the heart of Northwest B.C.'s prolific Golden Triangle, the Central Newfoundland Gold Belt where Sassy is one of the district's largest landowners, and the recently acquired Highrock uranium project in the Key Lake region of Saskatchewan's Athabasca Basin.

Investors are cautioned that, except for statements of historical fact, certain information contained in this document includes "forward looking information", with respect to a performance expectation for Sassy Resources Corporation. Such forward looking statements are based on current expectations, estimates and projections formulated using assumptions believed to be reasonable and involving a number of risks and uncertainties which could cause actual results to differ materially from those anticipated. Such factors include, without limitation, fluctuations in foreign exchange markets, the price of commodities in both the cash market and futures market, changes in legislation, taxation, controls and regulation of national and local governments and political and economic developments in Canada and other countries where Sassy carries out or may carry out business in the future, the availability of future business opportunities and the ability to successfully integrate acquisitions or operational difficulties related to technical activities of mining and reclamation, the speculative nature of exploration and development of mineral deposits, including risks obtaining necessary licenses and permits, reducing the quantity or grade of reserves, adverse changes in credit ratings, and the challenge of title. The Company does not undertake an obligation to update publicly or revise forward looking statements or information, whether as a result of new information, future events or otherwise, unless so required by applicable securities laws. Some of the results reported are historical and may not have been verified by the Company.

The CSE has neither approved nor disapproved the contents of this news release. Neither the CSE nor its Regulation Services Provider (as that term is defined in the policies of the CSE) accepts responsibility for the adequacy or accuracy of this release.