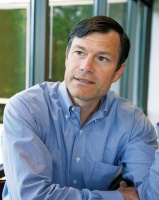 Jeff Ubben's ValueAct Capital is known for taking large, concentrated bets in a few select companies. Ubben is a deep value investor and has been known to work constructively with management to maximize shareholder, as was the case with Microsoft (NASDAQ: MSFT). Ubben's latest $1 billion bet is compelling for a number or reason - one being you can buy it cheaper than him.

The company is question is American Express (NYSE: AXP).

On August 7th, reports surfaced from Bloomberg that Ubben accumulated a $1 billion stake in American Express. Shares were around $75 per share before the news hit, which sent the stock over $80 per share. ValueAct's latest 13F confirmed 11.1 million shares were acquired during the second quarter, or about $900 million at the June 30th quarter end. The lowest price during the second quarter was about $77 per share. While is unclear exactly how much Ubben paid for his American Express stock it would be safe to assume that his cost basis is in the high $70s. With the recent market sell-off, shares currently trade at $75.30, giving you an opportunity to own the stock for cheaper than Ubben.

American Express has been out of favor since the surprise announcement in February 2015 that Costco (Nasdaq: COST) will end its relationship with the company. The news was a big blow and sent shares of American Express reeling from $85 per share to the highs $70s. In March, Costco announced it had entered into a new co-brand credit card program agreement with Citi and an acceptance and co-brand incentive agreement with Visa.

In addition to the Ubben stake the company's aggressive buyback plans makes shares attractive. In May, American Express approved a share repurchase plan of up to 150 million common shares. If fully executed, that would be 18% of the current float. If you take out Ubben's 11.1 million shares combined with Warren Buffett's 151.6 million shares, both considered in "strong hands", the buyback would represent a whopping 22% of the current float - that's almost 1 in 4 available shares to be bought back by the company. The buyback will bolster EPS and the stock price.

In addition to the buyback, the company's dividend is yielding 1.5%, so investors get paid to wait.

Combining Ubben's impressive track record, the company's aggressive buyback, dividend support and an attractive valuation, American Express should be a stock you take a swipe at.

Premium members can get the StreetInsider 'On Sale' report daily here or have it e-mailed to them. http://www.streetinsider.com/entities/StreetInsider+On+Sale